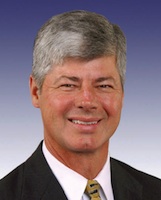 Today Rep. Bart Stupak – who lead the charge to get abortion funding out of healthcare reform, only to vote for the bill w/out pro-life protections in the end – announced that he will not run for re-election this year. For pro-lifers this is obviously a welcome retirement.

You know, the more I think about it, the more I find the whole Stupak Saga a sad reminder that something is lacking in American politics today. In his book, Render Unto Caesar (see Ch. 9), Archbishop Chaput illustrates what that something is in his profile of that greatest of statesmen, St. Thomas More. A man whose example of character and integrity “transcends time and culture” and is as relevant today as it was in sixteenth century England:

More stands as a witness against cowardice. He lived in interesting times not so alien to our own. He was a man of genuine Catholic faith at a moment when the assumptions that had sustained Christendom for centuries were unraveling into turmoil. He was a humanist; a friend of Erasmus; a man of letters, prudence, and diplomacy. More had no illusions about the corruption of individual clerics, the lethargy and hypocrisy of too many church leaders, and the urgent need for church reform. He also ably served King Henry VIII, whose policies he often felt were venal. He did not always agree with his sovereign. Nonetheless, once the king set a course, More complied with it. He did this with energy and ability, because among his core virtues was fidelity to duty. When the day came that service to his king clashed with what he held as a Catholic to be sacred, he betrayed neither his king nor his faith. He resigned. 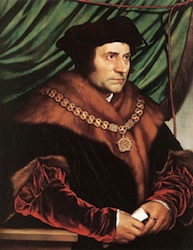 First,
More later stood trial for treason and was beheaded…

Why did More’s silence speak so loudly? Why did his peers need him to publicly endorse Henry’s divorce from Catherine of Aragon, marriage to Anne Boleyn, and power over the church? Why did anyone care what Thomas More thought in the first place? And why does anyone care now?

The answer is character. Then, as now, fidelity to principle was worth more than gold. People knew from experience that Thomas More was a man of his word; a man of honor in his public service and holiness in his private life. More did not inherit these qualities. He worked to achieve them.

More would often tell his children that “we cannot go to heaven in featherbeds.” He practiced what he preached. More worked hard to rein in his quick tongue and prideful ambitions. He brought the same unlinkered realism to judging his own sins that he used in understanding the world around him. As a result, he disciplined himself to be a man of piety. His morning prayer and Mass routine, his fasting and his hair shirt, have become symbols of his devotion. But we should never forget that these outward signs merely gave proof to the inner man who committed his whole life to Jesus Christ and Christ’s church.

From an early age, More grasped the need not merely to study and talk about God but to love God and to allow him to transform the heart…Public officials today often seem uneasy in talking about their religious faith. But such behavior would have baffled More and the people of his day. More knew that the very idea of “vocation” flows from the assumption that a loving God with a plan for all of us exists; a God who calls each of us to a special task. Thus, More sought to serve God above all things; not “God” as a pious ideal but as a living, personal Reality.

More was a brilliant lawyer, gifted author, tough political figure and loving father and husband — but most importantly, he was a person with the courage to say no, even when saying no meant humiliation and suffering. More was a man of principle guided by a properly formed conscience, who died rather than betray either. And this is the reason More’s life is relevant even today.

This is the kind of representation that is so badly needed – from both sides of the isle – in our public offices, especially among Catholics and especially when we’re dealing with such important principles as the intrinsic value and fundamental right to life of every human being.

The real tragedy of the Stupak Saga, KJL writes, is that he could have been such a leader, “a man who stood up on principle to the most prominent politicians of the day, of his own party.” But he did not. In fact, there is some evidence to suggest that he never intended to, despite his declarations to the contrary. What’s more, he took several others down with him who were following his once courageous lead and, perhaps permanently, damaged pro-lifers trust in any Democrat professing to be pro-life from here on out. Here’s hoping his replacement will be a man of more courage and integrity, whatever party he may belong to.

To quote the Archbishop’s book again:

2 Comments on “Wanted: More Men for All Seasons”