This article by Peter Hitchens, on his conversion to Christianity and relationship with his brother, atheist author Christopher Hitchens, is a must read! A good bit:

For a moral code to be effective, it must be attributed to, and vested in, a non-human source. It must be beyond the power of humanity to change it to suit itself.

Its most powerful expression is summed up in the words ‘Greater love hath no man than this, that a man lay down his life for his friends’.

The huge differences which can be observed between Christian societies and all others, even in the twilit afterglow of Christianity, originate in this specific injunction.

It is striking that in his dismissal of a need for absolute theistic morality, Christopher says in his book that ‘the order to “love thy neighbour as thyself” is too extreme and too strenuous to be obeyed’. Humans, he says, are not so constituted as to care for others as much as themselves.

This is demonstrably untrue, and can be shown to be untrue, through the unshakable devotion of mothers to their children; in the uncounted cases of husbands caring for sick, incontinent and demented wives (and vice versa) at their lives’ ends; through the heartrending deeds of courage on the battlefield.

Christopher Hitchen’s complaint reminds me of a famous quote from G. K. Chesterton:

“The Christian ideal has not been tried and found wanting. It has been found difficult and left untried.”

No one says that following Christ is going to be a piece of cake. That’s certainly not what Christ promised us himself. And yet, as Peter points out, there are examples of the kind of love that Christ calls us to all around us. From the everyday sacrifices that parents make to care for their children to the soldiers who give up their lives for their country on the battlefield. This passage from Hitchens’ article had me thinking of one of the Church’s modern Saints in particular who, while going through a difficult pregnancy, famously said:

“If you must choose between me and the baby, no hesitation; choose – and I demand it – the baby. Save her!” 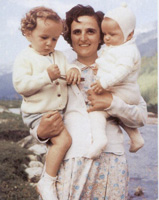 In 1961 Gianna Beretta Molla developed a fibroma on her uterus, a diagnosis that left her with the decision to either sacrifice the baby or give her own life. In her husband’s words: “Gianna was firmly convinced that the baby she was carrying was someone to love, to respect, and not an object about which she might exercise her own preference.” So, Gianna told doctors to spare the life of her unborn child and entrusted herself to prayer and Providence. Seven months after surgery to remove the fibroma, Gianna gave birth to a healthy baby girl, Gianna Emanuela, and, despite efforts to save both mother and child, died one week later after cries of “Jesus, I love you!” She was 39 years old.

No, it isn’t easy, but with God’s grace, selfless, self-sacrificing love is possible, even to the extent that one is willing to die for the sake of another (though, we certainly won’t all be called to make that ultimate sacrifice).

Sacrifice: the final end of prayer and action is not to receive praise or self advantage but to busy oneself, as did Jesus, with the total giving of oneself for others at the cost of renunciation and suffering, in the impassionate competition of love which arrives at the sacrificing of one’s own life.
~St. Gianna Beretta Molla