The back cover of Michael Crichton’s biotechnology thriller Next states:

Sadly, the out of control genetic world is no longer limited to the stuff of science fiction, and hasn’t been for several years now. The latest: Using cloning technology, UK scientists created 3-parent embryos to “prevent” the inheritance of mitochondrial disease. I know I’m about a week late on getting to this story (I’ve been a very lazy blogger, in case you haven’t noticed!), but if you’ve only heard about it from a mainstream media outlet, here are a few things to keep in mind:

1. The scientists here manipulated embryos – tiny human beings – not eggs. Not too long ago the media collectively decided to replace the word embryo with “fertilized egg.” Nevermind the fact that after fertilization the egg is no longer an egg, but an entirely new and living organism. Essentially these scientists created life to destroy life to create “better” life – only to ultimately end up destroying that life, too.

2. They didn’t just create 80 3-parent embryos. For every 3-parent embryo that was made, two other embryos were created and destroyed in the process as this diagram from Rebecca Taylor illustrates (click to view larger image): 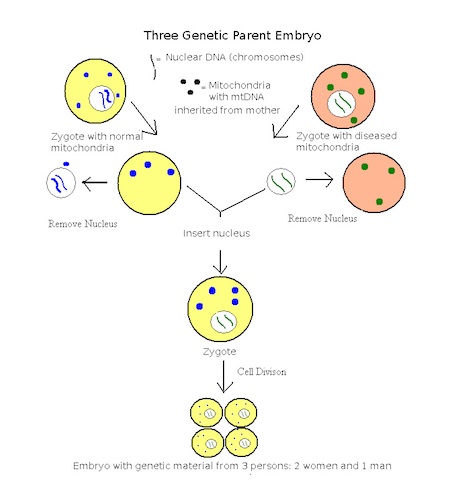 So, all together, we’re talking about 240 embryos- tiny human beings – created, used and destroyed in this little science experiment.

3. This is just the beginning! Most of the 3-parent embryos that were created were so mangled in the reprogramming process itself that they couldn’t even start dividing. Surely these scientists will be doing more research (and using more embryos) in order to get better results. And they are currently working with the Human Embryology and Fertilisation Authority, the UK body that licenses research on embryos, to see if they can someday be allowed to try to bring embryos created by this procedure to term. They also plan on seeking approval from the US Food and Drug Administration (source).

4. What I find most troubling about this whole thing is the fact that we don’t find out about this stuff until after the scientists put together and publish a report about their findings. Who knows how many more lives are being manipulated and destroyed like this in science labs all over the world (including right here in our own Country!!) right now that we aren’t hearing about?!

and, finally, I can’t stress this point often enough:

5. Trying to cure disease and limit human suffering is a good and noble cause, but, lofty goals and good intentions do not justify the use and destruction of innocent human life. It is not only the destruction of life that involved here that is troublesome, but also the very act of separating the creation of life from the marital embrace, even for the purpose of bringing about new life. It is contrary to the dignity of the child, the dignity of the spouses and their relationship, and Man’s status as a creature.

I’m glad to see that UK’s Society for the Protection of Unborn Children (SPUC) has called for an immediate halt to this kind of research and I hope they succeed. But, I can’t help wondering if it’s too late to do anything to stop this horrific kind of human experimentation. I mean, how long have we as a society universally allowed and even encouraged scientists to create life outside the womb so that infertile couples can have children? I just can’t see how, in the court of public opinion, this procedure – which, ultimately is about trying to create healthy, disease-free children – will be seen much differently, especially with such shoddy, inaccurate reporting.

Welcome to our genetic world, indeed.

Related: Why We Need to Ban Cloning, ASAP!!