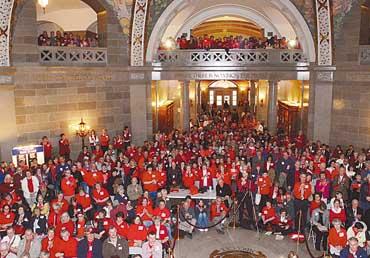 The No Cloning Rally was yesterday at the Capitol and it was a great success. Sen. Matt Bartle said that it was the biggest advocacy day turnout he’s seen for any issue in the eight years he’s been in the legislature. Missouri Right to Life estimated turnout at about 1,000. That’s incredible considering this was an all day event that took place in the middle of a work week.

I am always amazed at the great devotion of the pro-life crowd. Despite over 30 years of legalized abortion and new attacks on human life, like embryonic stem cell/cloning research, disguised as compassionate ways to ease human suffering, the movement continues to grow. Sen. Bartle also said that the passage of Amendment 2 has awakened a sleeping giant. I don’t know that we were ever really fully asleep, but Amendment 2 has certainly deepened our resolve to fight against the culture of death and the forces of evil in our day. I’m not sure how much luck we will have in the legislature with the joint resolution, but one thing is certain – we will not give up. Amendment 2 supporters “have taken on a highly motivated pro-life community that is used to long, protracted battles. We don’t give up. We will not stop until we are successful.” That is another quote from Sen. Bartle, who knows a thing or two about long battles, he has tried to get a cloning ban through the legislature since 2003.

Sen. Chuck Graham, who is paralyzed from a spinal cord injury, has vowed to filibuster the resolution if and when it gets to the Senate floor. So please say a prayer for us! We are fully prepared to start an initiative petition drive, but the joint resolution is our best option since it lets us control the ballot language. Otherwise it’s in the hands of the Secretary of State.