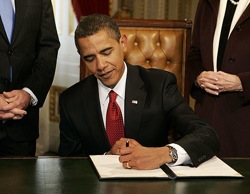 Yesterday President Obama did what we all knew he would do in office – overturn the Bush stem cell policy via executive order. Yuval Levin has an excellent commentary on this (h/t Paul).

Cloning was also apparently on the mind of the president as he signed this new executive order as he said in his remarks yesterday morning:

“we will ensure that our government never opens the door to the use of cloning for human reproduction. It is dangerous, profoundly wrong, and has no place in our society, or any society.”

Just how do we keep from “opening the door” to cloning for reproduction anyway? If we look into the president’s past we can easily find out what his suggestion would be. Four years ago the then Senator Obama co-signed the “Human Cloning Ban Act of 2005“, a bill that would have outlawed the implantation of the “product of nuclear transplantation into a uterus or the functional equivalent of a uterus.” This would seem like a positive solution, except that it does nothing to actually ban cloning or human reproduction.

Now, what Obama means as “human reproduction” is the actual birth of a live clone, but the only way to ensure that no clones are ever born is to ban the process of SCNT in humans totally, even for research purposes. Says cloning advocate Gregory Pence:

What else did Obama do yesterday? You might have missed this one, but kudos to Wesley Smith for his keen eye:

We all know that President Obama rescinded the Bush funding restrictions for ESCR. But that isn’t all he did. He also rescinded Executive Order 13435 of June 20, 2007.

That order from Bush required funding for alternative methods of stem cell research. Obama conveniently kept this one quiet, probably because he knows that, given the choice, Americans prefer ethical alternatives to destroying human embryos for research – especially when it comes to using their tax dollars to pay for it (check out this poll, broken down by Yuval Levin in the New Atlantis).

Why in the world would president Obama rescind requiring funding for the only type of research that everyone can agree on ethically? Smith offers two possible reasons:

First, vindictiveness against all things “Bush” or policies considered by the Left to be “pro life;” and second, a desire to get the public to see unborn human life as a mere corn crop ripe for the harvest.

Either way, it was a move totally contrary to the bipartisan unity he has so strongly called for as America’s political leader.

Some things to look out for in the future:
–The re-emergence of the Human Cloning Ban and Stem Cell Protection Act, introduced in 2007 by Sens. Feinstein and Hatch; a bill similar to the proposed Cloning “Ban” of 2005 mentioned above. see article: Cloning Doubletalk
–Congress to possibly take a look at overturning the Dickey-Wicker amendment which bans the use of tax dollars to create human embryos for scientific research. see: Obama Is Leaving Some Stem Cell Issues to Congress

Previous post:
Why We Need to Ban Cloning – ASAP!!