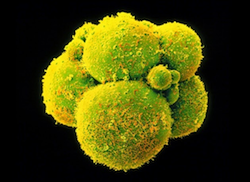 Shortly after I mentioned it as a possibility last week, scientists in China confirmed that they have been editing the genomes of several non-viable human embryos from IVF clinics using a new promising gene-editing technique called CRISPR.

Technically speaking the results were a disappointment to researchers and proved that the technique is not ready for “medical use”. Of the 85 embryos that they injected, either the embryo died or the gene was not altered.

As disappointing as the results were, I’m sure they won’t stop there. In fact, it has been reported that at least four other groups in China are working on this technique.

This should be a wake-up call. It is time for the US and China to follow the lead of many other countries and legally ban germ-line genetic modifications because of the danger to future generations.

I talked about this on the Mike Allen Show yesterday morning (I come on after about 15 minutes or so).