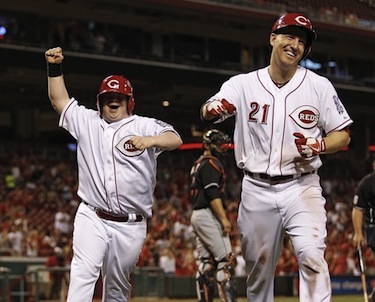 It was one of the most heartwarming moments of the 2013 baseball season. On April 18, after a pep-talk from his “best friend and greatest batboy,” Cincinnati Reds third baseman Todd Frazier ripped a two-run homer to center field off John Maine, extending the Reds lead to 11-1 over the Miami Marlins in the sixth:

I know there’s no crying in baseball, but it still brings tears of utter joy to my eyes. What makes it even more poignant is that this beautiful moment might never have happened if Teddy Kremer’s parents had listened to the geneticist who told them 30 years ago after Teddy was born that he would never have more than a 40 IQ, possibly might never walk or talk and that they should put him in an institution.

Teddy’s life and his relationship with the Reds was recently profiled on the ESPN E:60 series.

I hope that geneticist is still around to see this.

I wish I could say that the world has improved its approach to a Down syndrome diagnosis in the past 30 years. Instead, modern academics have managed to recast “eugenics” as a positive term, distinguishing their vision from past government-mandated eugenics policies. The emphasis now is on “selective reproduction” and the parents’ “choice” to decide what kind of child they want to have. The result has been a search and destroy mission to wipe people with Down syndrome off of the planet through eugenic abortion. And it has taken so much love out of the world.

Just look at the pure, genuine & beautiful happiness on both Teddy’s and Todd’s faces and tell me Teddy should never have been born. I dare you.