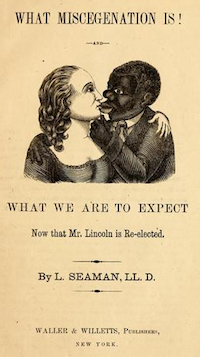 I don’t know about you, but one of my biggest pet-peeves in the debate over same-sex marriage is the comparison of SSM to interracial marriages.

Recently a good friend of mine received an email bringing up that very argument in response to an article he wrote about last month’s DOMA ruling. I really liked his response to this woman which he shared with me and allowed me to share here with my readers:

As for the religious liberty issue, I would challenge you to think about whether there is any objective meaning of marriage that actually makes sense. Is marriage whatever those in power decide it is? A number of states have begun amending their family law statutes to remove the “best interest of a child” as the weightiest factor in family law cases, so that same-sex couples can be given greater priority in custody battles. Are we to blindly assume there could not possibly be negative consequences to that? Is it impossible to imagine that a person might, as a matter of conscience, reasonably see some injustices arising from a system that no longer puts children first, but instead favors the desires of adults?

I know it has become fashionable in our culture to compare, as apples to apples, the historical plight of African Americans with the LGBT community. African Americans were forcefully transported to these shores, enslaved, and even when lawfully freed, subjected to decades of discrimination and segregation. It is a very happy development that the civil rights movement has come to be seen as a just cause by the vast majority of Americans. And, it is understandable why other groups would want to associate with that cause. But, is removing a simple statutory marriage restriction based on racial prejudice, so that men and women of different races could marry and have children, really the exact same thing as rewriting the nature of the institution itself (from one based on procreation and the rearing of children to one based on the public recognition of a committed relationship between two adults), an institution which has been the most basic unit of society for millennia and which has been embraced since time immemorial by virtually all world religions? Are there really no broader issues than there were when anti-miscegenation laws were repealed? Will churches and people of faith encounter no legitimate crises of conscience as the new order becomes universal? Should they just “get over it” and abandon centuries of teaching and human experience in order to “get with the times”?

My article ended on a positive note because I have always believed that the growing support among Americans of same-sex marriage was based on a desire for people to be able to live their lives as they see fit. If gay marriage becomes more and more an Orwellian tool to force people to abandon the thought crime of believing that a man, a woman, and their children form a special relationship unlike any other, or making celebration of homosexuality a condition of participation in public life, I have assumed that Americans would reject that for the same reason they are now becoming more supportive of gay marriage. However, letters like yours make me wonder. How many Catholics will join with the culture to condemn their fellow Catholics for failure to embrace the spirit of the age?

Unlike the overturning of anti-miscegenation laws, what we’re seeing with laws affirming same-sex marriage is a total redefining of the nature of the institute of marriage itself. Marriage laws are not about regulating love. As I’ve said here a few times, marriage, in both the religious and secular sense, is not merely about affirming the love between two people. It is our most foundational institution for raising children and building families (and, as a result, building society). It is a gift and a great responsibility, not a right.