Unlike the rest of the Catholic blogosphere, I never did offer my reflections on Benedict XVI’s papacy after he “retired” earlier this year. But, the latest “breakthrough” in human cloning got me thinking about Pope Benedict and how he often drew attention to what he called the “difficult problem of bioethics,” especially in the area of science and human biotechnology.

Over at Ignitum Today, I write: 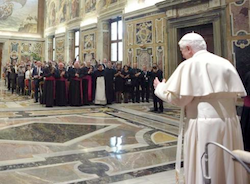 Like John Paul II, Pope Benedict recognized the temptation of science to reduce the human person to yet another material object to be analyzed, experimented upon, and manipulated, a mere means to human progress.

One instance of Benedict’s papacy in particular sticks out in my mind.

On Nov. 12, 2011, at the Vatican’s Apostolic Palace, Pope Benedict addressed participants of the first international conference Adult Stem Cells: Science and the Future of Man and Culture.

The Holy Father opened his remarks with praise for the various institutions exploring and promoting research on adult stem cells (ASCs). ASCs hold great possibilities for healing chronic degenerative illnesses by repairing damaged tissue and restoring its capacity for regeneration. These therapies, the Pope said, would be a great advancement for medical science as well as bring hope to many people who suffer and their families.

“For this reason, the Church naturally offers her encouragement to those who are engaged in conducting and supporting research of this kind, always with the proviso that it be carried out with due regard for the integral good of the human person and the common good of society.”

Man is both the “agent of scientific research,” and also “the object of that research,” the Pope noted. However, the “transcendent dignity” of man “entitles him always to remain the ultimate beneficiary of scientific research and never to be reduced to its instrument.” This, of course, is the problem with embryonic stem cell research. Embryos are human beings in the earliest stages of development and research using embryonic stem cells always involves the destruction of these nascent human lives.

“The destruction of even one human life can never be justified in terms of the benefit that it might conceivably bring to another.”

Science and ethics must be in dialogue with one another “to ensure that medical advances are never made at unacceptable human cost.” By calling for respect for the ethical limits of biomedical research, the pope said, the church does not seek to impede scientific progress, but to “guide it in a direction that is truly fruitful and beneficial to humanity.”

As I said last week, human cloning is not coming; it’s here. Pro-life 3.0 is upon us whether we like it or not and it’s progressing fast — and largely under the radar. I think Pope Benedict saw that very clearly. Let’s follow his lead and confront the difficult problem of bioethics now before it’s too late.