A few quick takes for your weekend:

1. The Church Is Not Backward, But Forward — my good friend Rebecca on the far-reaching wisdom of the Church. This article will also give you an idea of what’s coming up in our next episode of BioTalk! I’ll be editing that this weekend.

2. The Church and Science: The Right Place at the Right Time — Teresa Tomeo reports on the Vatican’s Second Annual Conference on Adult Stem Cells.

3. Made to Order Embryo Commodities Market — Wesley Smith comments on an article in the New England Journal of Medicine titled, Made-to-Order Embryos for Sale — A Brave New World? 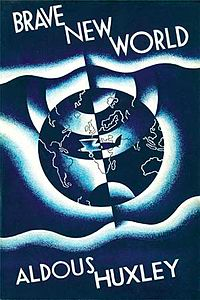 4. Speaking of BNW, I have finally started actually reading the book. Believe it or not, this was not something I ever had to read in high school. So, although I know generally what it’s supposed to be about, I’ve been feeling at a bit out of the loop as I’ve seen it referenced a lot lately in articles related to things I write about on a regular basis. Here is a particularly relavent passage I came across already:

There was an uneasy silence. Several of the boys blushed. They had not yet learned to draw the significant but often very fine distinction between smut and pure science. One, at last, had the courage to raise a hand.

“Human beings used to be …” he hesitated; the blood rushed to his cheeks. “Well, they used to be viviparous.”

“Quite right.” The Director nodded approvingly.

“And when the babies were decanted …”

“Well, then they were the parents–I mean, not the babies, of course; the other ones.” The poor boy was overwhelmed with confusion.

“In brief,” the Director summed up, “the parents were the father and the mother.” The smut that was really science fell with a crash into the boys’ eye-avoiding silence. “Mother,” he repeated loudly rubbing in the science; and, leaning back in his chair, “These,” he said gravely, “are unpleasant facts; I know it. But then most historical facts are unpleasant.”

Not so far-fetched when you read things like this and consider the direction we’re headed with genetic engineering and reproductive technology.

4. Finally, this week has been National Infertility Awareness Week. A good time to remind people that The Catholic Church is No Enemy of Science or the Infertile as she is often accused of being.