World Down Syndrome Day was this week. To celebrate, the IDSC put together a lovely video showing how those with Down syndrome are human beings just like you and me:

Of course I don’t have to remind you of the gruesome fate that awaits most of these beautiful people who are diagnosed before they are born. As the cult of normalcy continues to assert its power over the weak, deciding who gets to live and who must die based on its own arbitrary utilitarian standards, we would all do well to take a moment and ask ourselves, “What, exactly, is normal, anyway?” 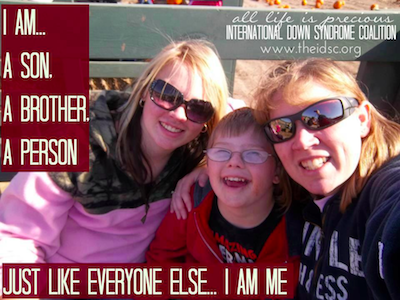 “disability, after all, is an “open minority,” one we will all join someday if we are not there already, because human beings are limited and those limits will be felt. If nothing else, we age into limitations of expected function. Most people experience illness and some form of impairment, at least temporarily…The witness that human beings are limited is as old as the book of Genesis. The very creation of human beings makes it clear that human beings are creatures of time and space, as opposed to God, who is Creator…We have a span: we are conceived, and we die. The soul is immortal and the body destined for resurrection and transformation. But we are creaturely. That means we have limits. Human beings are, by definition, limited.

She notes that the label of disability evokes two images: the angelic sufferer and the misbegotten monster. The first category’s “sentimental untruthfulness” she says, “causes squirming.” The latter, however, is where we see the very worst of how human beings treat each other. She goes on to explain how people being judged to “miss the mark of ‘normal'” leads to disastrous consequences — citing the gruesome reality of how children with disabilities are treated in some European countries and warning:

“Before we muster patriotic, American outrage, let’s remember that the expected American response, if the disability is known before birth, is to abort the child. In terms of accepting people with disabilities, we are arguably no better.”

Then she does a masterful job of going deep into the history of the eugenics movement of the late 19th, early 20th century focusing not just on Europe, where this movement was brought to its natural and horrific conclusion, but also spending a great deal of time, once again, on how eugenic thought and practices were common and widespread throughout the United States. Something that is often forgotten when we think about the history of eugenics.

I hope her book gets published for this chapter alone. I’m still not finished with it, yet, but I love what I’ve read so far. I especially like how she manages to bring all this back to God and the way He defines what it means to be human — specifically in the person of Jesus Christ:

“The messiah has consented to a way of limitation, of embodiment that can be bound, injured and killed as the way to define ‘the man.’
…
“When we see or experience limitation, even impairment, we should not think, ‘behold, the monster,’ but rather ‘behold, the man’ (John 19:5). The incarnation of Christ and his passion is the ‘norm,’ not anything defined by the cult of normalcy.”