A nice reflection from Bishop Kevin C. Rhoades of Ft. Wayne-South Bend, IN: 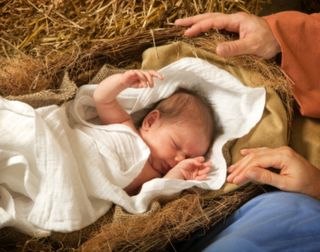 The Son of God, the second Person of the Holy Trinity, became a human being so that He could show His immense love for us in a way that we could see and hear and touch. As we turn our gaze today in wonder and gratitude towards the tiny child in the manger, we see writ large the central insight of Blessed John Paul II’s “theology of the body”: the human body has the capacity to express love, “that love precisely in which the person becomes a gift and-by means of this gift-fulfills the very meaning of his being and existence” (General Audience 1/16/80).

This “nuptial meaning of the body,” given to us in mystery of creation, finds its highest expression in the mystery of redemption. By assuming our human nature, Christ confirmed the dignity of the human body and elevated it further still, enabling it to express, not only the love that human beings have for one another, but above all, the love that God has for each of us. In his very first encyclical, Redemptor Hominis, the Redeemer of Man, Blessed John Paul II made his own these stirring words from the Second Vatican Council: “Human nature, by the very fact that it was assumed, not absorbed, in him, has been raised in us also to a dignity beyond compare. For, by his Incarnation, he, the son of God, in a certain way united himself with each man. He worked with human hands, he thought with a human mind. He acted with a human will, and with a human heart he loved. Born of the Virgin Mary, he has truly been made one of us, like to us in all things except sin” (Gaudium et Spes, 22).