I’ve talked here before about how science fiction is not so fictional anymore, even when it comes to human cloning. Lately, some other, smarter people have also been taking notice.

First, over at the American Spectator, Daniel Allott takes a look at the movie Gattaca and how, 15 years later, the sci-fi thriller is fast becoming our reality:

In Gattaca’s world, most parents genetically engineer their children, and the few parents who conceive naturally risk producing children who become members of an underclass called “invalids.”

Set in the “not too distant future,” Gattaca, which starred Ethan Hawke, Uma Thurman, and Jude Law, debuted on October 24, 1997. The dystopian sci-fi thriller is a cautionary tale of what could happen if humanity doesn’t check its eugenic impulses.

Fifteen years after the film’s release, advances in reproductive and genetic medicine are producing the type of society Gattaca warned against.

The fields of assisted reproduction and genetics have been transformed since 1997. The Human Genome Project was completed in 2003, which enhanced our understanding of the genetic roots of human traits.

It took ten years and more than $3 billion to sequence the first human genome (DNA). But some scientists believe it won’t be long before a person’s full genetic make-up could be decoded in hours and for less than $1,000.

Even now couples can discern a great deal about their children before they are born. Genetic testing is being mainstreamed into the practice of obstetrics. In 2007, the American College of Obstetricians and Gynecologists began recommending that all women be offered prenatal screening for genetic conditions.

Next up, LiveScience’s Jeremy Hsu discusses how the human clones in the new Tom Hanks movie Cloud Atlas is not as far-fetched an idea as it sounds: 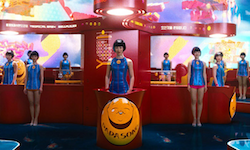 A dystopian society supported by genetically modified clone workers stands out among the six stories that make up the sprawling film “Cloud Atlas.” The idea may seem far-fetched because of political opposition to human cloning and genetic modification in today’s world, but the science is closer than many people may think.

The “Cloud Atlas” story focuses on a genetically-engineered “fabricant” clone named Sonmi~451 who is one of millions raised in an artificial “wombtank,” destined to serve from birth. Such fabricants do practically every kind of manual or service labor, work as soldiers and prostitutes, and even act as “living doll” toys for “pureblood” kids in the futuristic society of Nea So Copros — an ultra-corporate version of a unified Korea that has grown to include much of Asia.

“Of course, any technology could be abused, but a nightmarish ‘Cloud Atlas’ future would not flow inexorably from the deployment of human germline genetic modification,” said Kevin Smith, a bioethicist at Abertay University in the UK.

Their articles are quite timely considering the news last week that a research team at Oregon Health and Sciences University successfully created a dozen human embryos with genes from one man and two women using a cloning technique called “maternal spindle transfer.”

The blurb on the back cover of my copy of Michael Crichton’s biotechnology thriller Next states:

Sadly, the out of control genetic world is no longer limited to the stuff of science fiction.