Here are a few of the thoughts/reactions to the Republican National Convention that I shared via Facebook and Twitter this week.

1. Not surprisingly, Rick Santorum did the best job of addressing the sanctity of all human life: 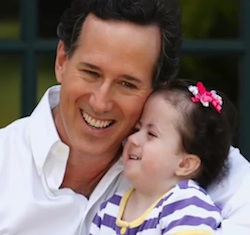 Four and a half years ago I stood over a hospital isolette staring at the tiny hands of our newborn daughter who we hoped was perfectly healthy. But Bella’s hands were just a little different – and I knew different wasn’t good news.

The doctors later told us Bella was incompatible with life and to prepare to let go. They said, even if she did survive, her disabilities would be so severe that Bella would not have a life worth living.

We didn’t let go and today Bella is full of life and she has made our lives and countless others much more worth living.

I thank God that America still has one party that reaches out their hands in love to lift up all of God’s children – born and unborn – and says that each of us has dignity and all of us have the right to live the American Dream.

And without you America is not keeping faith with that dream. 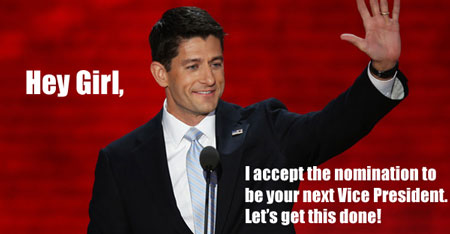 Yes, I made this one myself. It’s not quite as witty as some of the other ones in the meme, but I’m kinda proud of it. 🙂

5. ‘This week: “Mitt helped my dying 14-year old son write a will.” Next week: “Obama forced other people to subsidize my birth control.”‘ #sandrafluke -Retweeted from Kevin Eder.

6. Clint, I love you, man, but you absolutely broke my heart with Million Dollar Baby. Why? #GOP2012

7. Wow. Now I know why so many people were hoping Rubio would get the veep nod. Seriously. Never heard the guy speak before tonight. None of the speeches this week were bad, but they were nothing like this one. I’m not one to ever be impressed by or get sentimental over political speeches. Ever. But, when he was speaking I just couldn’t help thinking, “man, this guy is what the Republican party has been missing for the last 24 years: the next Great Communicator.” In content and delivery this was, hands down, the best speech of the entire convention, followed closely by Condi.

I’m not saying it made me feel overly blessed or patriotic. I just appreciated it for an incredibly well delivered speech. I can’t feel my legs, but I think a thrill might have gone up one of them at some point.

Bonus: I did not watch any of the post speech cable news commentary and critiques. Mostly because I’m not interested at all in what any of those people think anymore. I’m not the major political junkie that I once was, listening to conservative talk radio all day, reading political blogs and watching endless hours of cable news shows. I’m over that.

However, as disillusioned and fed up as I have become with politicians and pundits on both sides in recent years, I am still interested government and politics. I still think it’s important, especially when it comes to protecting the dignity of the human person, and I still enjoy a good conversation about it. So I did watch some political commentary this week.

One of my new favorite YouTube channels broadcasted live for about a 30 minutes to an hour every day from the convention. Most of them are pretty far to the left on social issues – especially, you’ll see if you watch the videos, Meg, who might actually break me out of my YouTube shell to address some of the things she said (skip to about the 28:30/35 ish mark) about Planned Parenthood and her question about why women would feel comfortable in a party that is “supposedly” waging a “war on women.” I’m not surprised, but still disappointed that she could not find more than one woman at the convention who would stop to talk to her about those things.

So even though I do not agree with them on most of the issues and felt my palm hitting my face more than a few times during Meg’s commentary, I did enjoy it. I appreciate what SourceFed is doing to try to get younger people interested discussing the important issues of our times. And, for the most part, they actually manage to stay fairly balanced in their regular daily news coverage (which also includes human interest pieces and lighter content about science, gaming, movies, etc…) – except on gay marriage.

——————
So that’s what I thought. Head on over to Conversion Diary for more Quick Takes and leave a comment below with your own Convention thoughts!