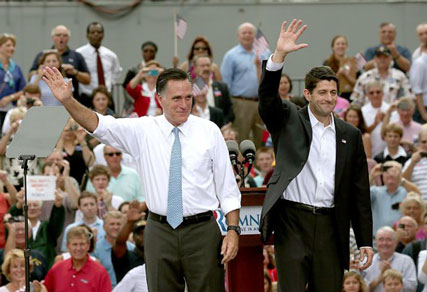 Is it bad that, upon hearing about the Ryan pick yesterday, this was my first reaction (via Facebook):

Haha! All I know about Paul Ryan is that after he gave the GOP response to one of the President’s SOTU addresses all I could think was, “I’m sorry, I was a little too distracted by how cute he was to listen to anything he just said.” You know, Romney’s a pretty good looking man, too. This might be the most attractive presidential ticket in history.

But seriously. That Ryan is solidly pro-life and a practicing Catholic definitely makes Romney a more palatable candidate for president in my book, but only slightly (I’m not really convinced that the vice-president has a major influence on the president or his policies). But, hey, slightly palatable is more than I can say for the totally unsavory character we’ve had to stomach for the past 3 1/2 years. So he’s got that going for him, which is nice.

An interesting anecdote: a friend of mine from WI told me

We just recently met (Ryan) and his wife at a wedding reception that we were all guests at and we chatted about Catholic stuff. His kids are in Catholic school and one of his daughters visits the sisters nearby three or four times a week (budding religious).