Over at the TOB Institute, Christopher West reflects on the resurrection of our bodies. A little piece: 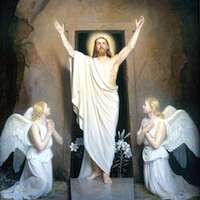 During this Easter season it is fitting to reflect on the resurrection not just of Jesus’ body, but of our own bodies at the end of time.
…
We often speak of the “souls” in heaven. When we buried my grandmother, I saw her body go in the ground and I’m confident that her soul is now enjoying some form of union with God. But the souls currently in heaven (“currently,” of course, is a time-bound word which doesn’t even apply to heaven) remain in an “inhuman” state until the resurrection of their bodies. It can’t be any other way for us as human beings. Since God created us as a union of body and soul, the separation of the two at death is entirely “unnatural.” Indeed, it’s a cosmic tragedy.

This part reminds me of something I posted here a few weeks ago from Fr. Richard John Neuhaus’ book As I Lay Dying: Meditations Upon Returning:

This body and I, this body that is inseparable from me, together we have been this life…Thomas Aquinas was right. No matter what the joy of the beatific vision, I think, it will not be perfect until my body and I are together again. Or, put differently, heaven will be perfect, but I, body and soul, will not be perfectly present to the perfection until then (p. 133).

The above is a revisitation of his reflections earlier in the book (p. 90-91) on the union of the body and soul and whether the body is necessary for happiness – even in heaven:

A medieval pope, John XXII, got in trouble for teaching that the souls in heaven are not entirely happy, so much do they want to be reunited with their bodies. He said, citing Revelation 6, that the souls in paradise are still “under the altar” and will only be raised to the perfect vision of God when they have their bodies back. After much criticism, Pope John, on his deathbead in 1334, modified his teaching and allowed as how the saints are perfectly happy even before the resurrection fo their bodies. But I believe that he had made an important point – that the body is, in fact, essential to the fullness of the self.

He admits that the limitations of our knowledge here on earth make such questions impossible to answer definitively, but he goes on to quote St. Thomas Aquinas who said that

“the soul desires to enjoy God in such a way that the enjoyment also may overflow into the body, as far as possible. And therefore, as long as it enjoys God, without the fellowship of the body, its appetite is at rest in that which it has, in such a way that it would still wish the body to attain to its share.”

So, the desire of the separated soul in heaven, Aquinas says, is “entirely at rest” as it has all that it needs to please it’s appetite (God), but it is not “wholly at rest” since it does not possess it “in every way it would wish to possess it.” In other words, says Neuhaus, it’s not that there is anything lacking in the beatific vision, but “the perfect enjoyment of that vision awaits the resurrection of the body” (my emphasis).

What do you think? Too much to think about? Of course, as Fr. Neuhaus notes, all that can be known for sure here on earth is that we will, in fact, be reunited with our bodies at the end of time (Jn. 5:28-29, 1 Corinth 15:12-13, 51-52). What that means in terms of how we will enjoy heaven before and after the resurrection is purely speculation. Ahem:

But as it is written: “What eye has not seen, and ear has not heard, and what has not entered the human heart, what God has prepared for those who love him,” (1 Corinth. 2:9)