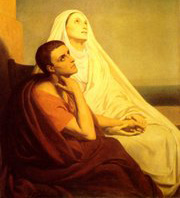 Today we celebrated the feast of the mother of one of the Church’s most celebrated saints. St. Monica, mother of St. Augustine (whose feast day is tomorrow), prayed unceasingly for the conversion of her famous son, and, as we all know, was happily obliged by Our Lord. Not only that, but her husband, Patricius, a pagan with a terrible temper, converted to Christianity and was baptized a year before his death thanks to her prayers as well. She is a wonderful example for married couples and parents who are called to care above all for the spiritual well being of their spouse and children. I believe that it was not only her prayers, but also her example as a pious Christian woman that also won over her husband and son. This passage from 1 Peter makes me think of St. Monica and the example that all married women should give:

Likewise, you wives be submissive to your husbands, so that some, though they do not obey the word, may be won without a word by the behavior of their wives, when they see your reverent and chaste behavior. Let not yours be the outward adorning with braiding of hair, decoration of gold, and wearing of robes, but let it be the hidden person of the heart with the imperishable jewel of a gentle and quiet spirit, which in God’s sight is very precious.
1 Peter 3:1-5

She is also an example to all of us of our call to persevere in prayer. The conversion of St. Augustine did not happen overnight. It was a long, turbulent journey (20 years or more) during which the reluctant saint fell in and out of serious sin and his mother deeper and deeper into a conversation with Christ on behalf of her son, storming the gates of heaven with her constant tears and prayer. In the end this great mother witnessed the baptism of one of our greatest saints and spent the last days of her life reflecting with him and longing for the joys of heaven:

“Son, as far as I am concerned, nothing in this life now gives me any pleasure. I do not know why I am still here, since I have no further hopes in this world. I did have one reason for wanting to live a little longer: to see you become a Catholic Christian before I died. God has lavished his gifts on me in that respect, for I know that you have renounced earthly happiness to be his servant. So what am I doing here?”
from St. Augustine’s Confessions

Her final request was that her son, who became a priest and bishop, remember her “at the altar of the Lord wherever you may be.”