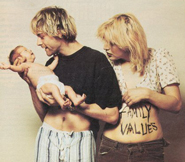 A new book by former Nirvana manager Danny Goldberg reveals that Courtney Love was heavily pressured to have an abortion when she found out she was pregnant 16 years ago. A doctor at Cedars-Sinai Medical Center’s chemical dependency unit gave the advice citing concern for the health of the Cobain’s unborn child due to Courtney’s drug addiction. Love objected to the obvious coercion stating, “I mean I’m pro-choice, but that doesn’t mean that anyone has the right to tell me to have a f***ing abortion.”

She then pressed the doctor for evidence of his allegations asking, “Is that a medical fact, or is that just your opinion? I want to see it in a medical book.” After which the doctor admitted that because the pregnancy was still early it was possible to have a healthy child if she were to stop using heroin – which she did, and a healthy Frances Bean Cobain was born in August 1992.

Courtney Love is far from the perfect role model of motherhood, but she certainly deserves credit for not giving in to the heavy pressure to abort and for cleaning herself up, at least temporarily, for the sake of her unborn child (she has since been on and off illegal drugs, causing her at one point to lose custody of Frances at age 11). And the now 15 year old Frances seems to have turned out pretty well. See: Frances Bean Cobain: ‘I’m Not My Parents’