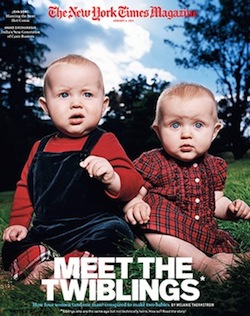 In this very long article in the NYTimes, Melanie Thernstrom writes about how she, after undergoing FIVE unsuccessful rounds of IVF finally got the children she wanted when she found two different strangers to – at the same time – carry to term two embryos fertilized by another woman and her husband. The make up of this family is mind-numbing to thing about. Each child essentially has three “mothers” (depending on how you define the term) – the egg donor, the surrogate and the woman who is now raising them (four different women altogether) – and one father. It’s far too long to get into every absurd detail, but I did want to highlight this paragraph:

I began researching surrogacy and egg donation — corresponding with gestational carriers on surrogacy Web sites and talking to agencies. The process seemed so daunting and alienating — inviting all these strangers into our bedroom, creating relationships with unknown conventions and risks, giving others extraordinary power. In the story of what happens when a man and a woman love each other very much, they don’t need strangers to lend them their gametes. Having children was one of life’s great acts of self-definition. How could we turn the most intimate thing a couple could do — coupling — into a ménage à trois,à quatre or cinq?

Interesting how, though she obviously dismisses it, this woman seems to instinctively know exactly what is so wrong with this kind of reproductive technology. Look, I really feel for couples who cannot have kids of their own. But children, human beings, are not something people are entitled to. Men and women are privileged to be allowed to participate in God’s creating work, but ultimately, life is a gift to be received, not obtained at any and all cost.

Oh, and here’s another new term for you from the article (well, it’s new to me anyway): “gestational carrier.” That’s what we’re calling surrogate mothers now??? Sounds like something from a horror cloning movie. Well…maybe that kinda fits after all.