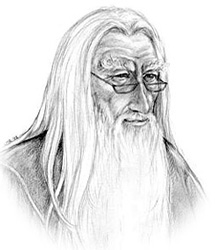 No, I do not give Rowling credit for “outing” a beloved character, to many children by the way, after the series has come to a final and satisfying conclusion, without any major moral catastrophes – until now. That was unnecessary and, I think, unwise, given her large Christian fan base, which spends a sometimes exhaustive amount of time defending her and her novels from those accusing her of anti-Christian, witchcraft and sorcery indoctrination of our children.

However (and this is to her credit), if in fact the character of Dumbledore has been homosexual in her mind as she was writing the series – one of the things I find amazing about her as an author is the extensive background information she has for her characters, even the most insignificant, which have been in her mind for year and years – she chose not to make that even a minute detail in any one of the seven novels, although it has been speculation among some readers (I never once wondered about his sexual orientation or love life, it was irrelevant to the story for me). She never even mentioned it in any interviews or on her website, which is filled with little known facts and answers about characters and details in her books – which could possibly suggest this is a new character development on her part, actually.

Keeping in mind the fact that this is a fictional character and, the way the story is written, one does not have to believe that Dumbledore is gay, despite the author’s intention (in literature there are multiple viewpoints or interpretations, two of which are the author’s and the reader’s and they don’t have to match) – think about this. If he was actually homosexual, as Rowling has now told us, it is not impossible for us to interpret in the novels that, after never fully recovering from a decades (centuries?) old heartbreak, he had been living a chaste and even virtuous life – protecting students from, and helping Harry to defeat the forces of darkness.

This is similar to how Catholics encourage all persons with serious same sex attractions to live. From the Courage Apostolate website, the 5 goals for those with homosexual attractions:

1. Live chaste lives in accordance with the Roman Catholic Church’s teaching on homosexuality. (Chastity) – for this see the Catechism of the Catholic Church
2. Dedicate ones life to Christ through service to others, spiritual reading, prayer, meditation, individual spiritual direction, frequent attendance at Mass, and the frequent reception of the sacraments of Reconciliation and Holy Eucharist. (Prayer and Dedication)
3. Foster a spirit of fellowship in which all may share thoughts and experiences, and so ensure that no one will have to face the problems of homosexuality alone. (Fellowship)
4. Be mindful of the truth that chaste friendships are not only possible but necessary in a chaste Christian life and in doing so provide encouragement to one another in forming and sustaining them. (Support)
5. Live lives that may serve as good examples to others. (Good Example)

Christ is the model of chastity and we are all called to lead a chaste life, each according to his particular state of life (CCC 2394). As Catholics we believe that homosexuals who, for whatever reason, have a strong attraction to members of the same sex, have a special calling to celibacy. Christ himself says, “Some are incapable of marriage because they were born so,” (Mt. 19:12). I don’t refer to that in defense of the idea of a “gay gene” but I do see it as a possible reference to those with homosexual attractions.

Let’s just hope this is the last post-Potter surprise. From Steltek in Transition:

What’s next? Saying in passing that McGonnagal had a magical abortion and isn’t sorry about it, just because you can!?