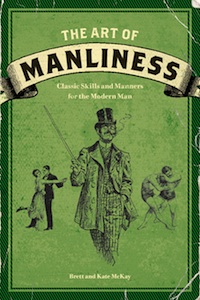 I been meaning to post this for several weeks now! Art of Manliness recently had a great article titled What is Manliness? In it, the authors examines the different cultural and philosophical definitions of manliness, concluding that, for by any man, in any situation, manliness essentially boils down to:

striving for excellence and virtue in all areas of your life, fulfilling your potential as a man, and being the absolute best brother, friend, husband, father and citizen you can be.

A mission fulfilled by the cultivation of virtues such as:

Of course the same can certainly be said of women as well, but, as the authors point out:

women and men strive for the same virtues, but often attain them and express them in different ways. The virtues will be lived and manifested differently in the lives of sisters, mothers, and wives than in brothers, husbands, and fathers. Two different musical instruments, playing the exact same notes, will produce two different sounds. The difference in the sounds is one of those ineffable things that’s hard to describe with words, but easy to discern. Neither instrument is better than the other; in the hands of the diligent and dedicated, each instrument plays music which fills the spirit and adds beauty to the world.

Beautifully stated. Men and women are certainly both equal our dignity as persons and deserve equal respect in that way. But we are profoundly different in how we are created biologically, emotionally, spiritually and we are meant to compliment each other with those sexual differences.

One example that the author gives as an essential difference between the sexes is that, generally speaking, males have a harder time moving from boyhood into manhood than girls do moving to womanhood. These days, I think a lot of this has to do with the culture we live in and the prolonged adolescence in both sexes, really. Nevertheless, it is true that, while femininity and “womanliness” tend to be more intuitive, men typically learn manliness from other men, especially from their fathers who are their very first masculine influences. This is why it is so important for young boys, if they have an absent father, to have (an)other good, positive masculine influence(s) in their lives.

For those trying to raise good, manly men of God, over at Catholic Exchange’s TOB Channel, Kevin Whelan has been chronicling his progress with what he calls the “Manhood Project“, an on-going discussion he use as a way to help his sons grow into Godly, Loving Men: See Parts one, two, three, four, five, six and seven. Good stuff!

Other good manly articles at AOM:
So You Want to Become a Man
Coming of Age: The Importance of Male Rites of Passage
Get the AOM Book