I seriously wonder if pro-choice people ever really listen to themselves speak. 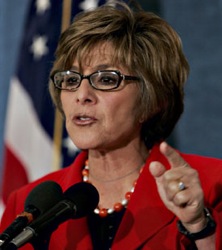 On C-Span Thursday morning I caught Sen. Barbara Boxer arguing with Sen. Orin Hatch against an amendment to codify a rule the Bush Administration put in place adding the “unborn child” as a patient under SCHIP. She claimed that because SCHIP already offered coverage to all pregnant women that unborn children would be automatically covered in the program and complained that Bush’s rule “injected the abortion debate into the bill” and, by adding the “unborn child” language with “no mention of the mother”, unfairly separated a woman from her unborn child. She said:

Sen. Boxer, abortion is the ultimate separation of a woman and her unborn child.

But I feel that the greatest destroyer of peace today is abortion, because it is a war against the child, a direct killing of the innocent child, murder by the mother herself.
~Mother Teresa

3 Comments on “Who is Separating Pregnant Women from Their Unborn Children?”