I know many people who consider third party reproduction (3PR) a “gift from God” to suffering infertile couples. But as far as I can see, 3PR is and has been, more than anything I’ve seen in modern history, a prime example of human beings “playing God.”

The latest example comes from American model Chrissy Teigen and her Grammy winning husband, John Legend who are expecting a baby girl — and not by accident.

“I’ve made this decision,” Teigen told People. “Not only am I having a girl, but I picked the girl from her little embryo. I picked her and was like, ‘Let’s put in the girl.'” 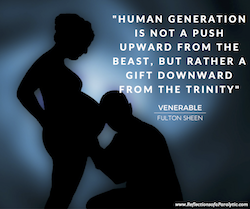 In his book Three to Get Married, Ven. Fulton Sheen I recently came across this:

Our entire outlook on life, conception and birth changes once these things are seen not as an evolution from slime, but as a gift from the Divine. Human generation is not a push upward from the beast, but rather a gift downward from the Trinity. The begetting of children is not an imitation of the beasts of the field, but a feeble reflection of the eternal generation of the second Person in the bosom of the Father.

It’s amazing how much “our entire outlook on life, conception and birth” has changed in such a short time.

Contrast the good bishop’s words to those of Dr. Gil Wilshire with Mid-Missouri Reproductive Medicine and Surgery in Columbia, MO, who said: “We need three things: a good egg, some good sperm and a good uterus. And we can mix and match these.”

This is the world we live in. The creation of new human life is nothing more than a biological formula; a science experiment, rather than the mysterious fruit of a loving act between husband and wife; a gift of science rather than a gift from the Divine.

Is it any wonder, then, that people think they can pick and choose from the children they manufacture which ones get to see the light of day?

Taking the creation of life out of its natural, God-given context and moving it into the science lab has seriously altered how many view the wonder and mystery of new life and how that new life should be treated.

Sex-selection is not uncommon with 3PR, especially here in the United States, and “weeding out” weak, diseased or otherwise “defective” embryos is standard practice. As gene editing technology progresses, is there any doubt we’ll “designer babies” in the not-to-distant future?

Recommended: Chrissy Teigen’s ‘embryo-shopping’ is a slap in the face

One Comment on “A Gift From God or Science?”