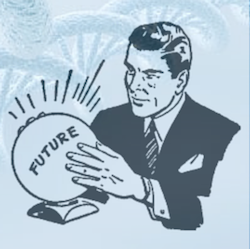 As he does every year, the CBC’s resident psychic, Wesley Smith, takes a look into his crystal ball (or whatever) and tells us what he sees happening in the world of bioethics in the coming year:

I believed last year—and still do—that the Canadian Supreme Court will declare a constitutional right to assisted suicide. The case was argued last year but no decision has yet been issued.

…I told you last year to expect a New Mexico trial judge’s ruling legalizing “aid in dying”—aka, assisted suicide—to be reversed. I still believe the court will exercise such wisdom.
…
A British Columbia Court of Appeal will rule that people can require in an advance medical directive that nursing home caregivers to withhold spoon-feeding if they become seriously demented or otherwise cognitively compromised. This would permit people to force others help them commit suicide by self-starvation—known in euthanasia parlance as “Voluntary Stopping Eating & Drinking” (VSED)— when they are not competent to make medical decisions. I consider this the most dangerous lawsuit in bioethics as the real impact would be to legally force nurses and doctors to starve incompetent patients to death—even if they eat and drink willingly.

The first human experiments in the creation of three-parent embryos will begin. These embryos would be created by genetically combining two women’s eggs and fertilizing them with sperm. The supposed point is to prevent a mother from passing on mitochondrial disease. But as often happens in these matters, if successful, I believe the technique would be employed to create novel family arrangements.

Laws and regulations will increasingly require health insurance to cover sex change surgery and other interventions. San Francisco already covers such interventions for transsexuals. Look for regulators and courts to continue expanding the mandate, eventually (not next year) culminating in required coverage under the Affordable Care Act, under Medicare, in prisons, in the military, and by the Department of Veteran’s Affairs.

Well, that last prediction partially assumes that the ACA—also known as Obamacare—will remain the law of the land. The U.S. Supreme Court will rule in a landmark case, that the wording of law does not permit subsidies for insurance purchased on federal exchanges. That will make Obamacare fiscally untenable, leading to a massive national debate and brouhaha in Congress over repeal and reform of the federal law. Substantial compromise on the issue will prove impossible in 2015, leaving the law badly damaged but still in effect. Indeed, the debate about how to “fix” Obamacare over this and other matters will remain become a central issue in 2016’s state and federal election politics.

There will be a massive drive to legalize assisted suicide throughout the country—aided and abetted by in-the-tank media harnessing the raw emotionalism generated by the Brittany Maynard case—to bludgeon legislatures into passing “death with dignity” laws. That effort will reach the verge of success, but in the end, will be stymied. No new laws allowing assisted suicide will go into effect in the USA, although it might require a governor’s veto to prevent a fourth state from formally legalizing suicide as a “medical treatment.” Efforts in the UK and Scotland to legalize assisted suicide will also fall short. These defeats will not resolve the controversy, but the results will have been so close that the euthanasia movement will move forward even more energetically in 2016. That will be the year when the truly consequential battles in this area will mostly take place (particularly in California). But that’s a prediction for next year.

He’s usually pretty accurate. Click here to see how well he did with last year’s predictions.