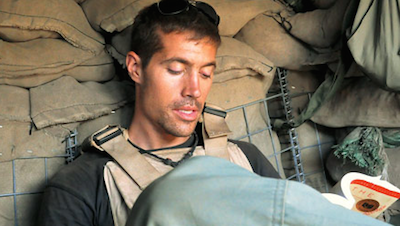 The persecution of Christians and other innocent civilians half a world away suddenly hit close to home for Americans this week with news that kidnapped journalist James Foley had been beheaded by members of the Islamic State.

In the wake of his death, a letter has emerged from Foley to his alma mater, Marquette University. In it, he wrote of his imprisonment in a military detention center in Tripoli in 2011 and of the solace he found in praying the rosary during his incarceration there.

If nothing else, prayer was the glue that enabled my freedom, an inner freedom first and later the miracle of being released during a war in which the regime had no real incentive to free us. It didn’t make sense, but faith did.

I pray that he was able to maintain that inner freedom throughout his captivity and execution.

I don’t really have a whole lot to say. I just wanted to recommend a book by my favorite modern spiritual author, Fr. Jacques Philippe, called Interior Freedom. It is by far his best.

He also released a new one this year specifically about prayer. That’s the only one of his books I have not read yet, but, like all the ones before it, I’m sure it is quite helpful and spiritually insightful.

Foley’s death and the deaths and displacement of thousands of others are a stark, painful reminder that our exterior freedom is never guaranteed. But there is one thing that no force can ever take away from us.

Interior freedom is not only necessary in captivity, but also in our ordinary daily lives when even small annoyances can threaten our peace and calm.

Not surprisingly, The Anchoress also has some words worth reflecting on. Specifically:

Rejoice in hope, endure in affliction, persevere in prayer. Rom. 12:12

Eternal rest grant unto him, O Lord, and let perpetual light shine upon him. May his soul and the souls of the faithful departed, through the mercy of God, rest in peace.