Over at the Register, Rebecca Taylor comments on the recent surrogacy scandal from Thailand involving an Australian couple and a surrogate from Thailand who gave birth to twins, one of whom has Down syndrome. 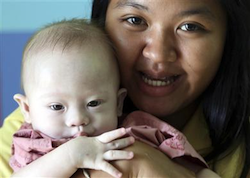 The couple took home the healthy baby girl, leaving the future of her twin brother with DS in jeopardy.

The Vatican newspaper L’Osservatore Romano ran an op-ed commenting on Gammy’s story, stating, “In reality, there’s little to be indignant about: If you accept the logic of a child as a product, this is the obvious consequence.”

It is no secret that the stance of the Catholic Church — which categorically rejects the “logic” of regarding any child as a mere “product” — is wildly unpopular. In a society that thinks any way to make a baby is the right way to make a baby, the Church is often seen as a backward institution that rejects and shames infertile couples. We are labeled as “haters.”

In reality, nothing could be farther from the truth.

What is the Church really saying when she rejects artificial reproductive technologies (ART) like IVF and surrogacy? The Church teaches that to create human life outside of the act of intercourse between husband and wife is unethical. Why? There are many reasons, but the most compelling is because we all deserve the absolute best start in life.

She goes into much more detail, but the crux of Taylor’s article is something you’ve seen me bring up here time and time again: Taking the creation of life out of its natural, God-given context and moving it into the science lab seriously alters how many view the wonder and mystery of new life and how that new life should be treated.

For example, Taylor uses a quote from a story I mentioned here a few years ago, about a woman who was chose to kill one of the healthy unborn twins she conceived via IVF. She rationalized it this way:

If I had conceived these twins naturally, I wouldn’t have reduced this pregnancy, because you feel like if there’s a natural order, then you don’t want to disturb it. But we created this child in such an artificial manner — in a test tube, choosing an egg donor, having the embryo placed in me — and somehow, making a decision about how many to carry seemed to be just another choice. The pregnancy was all so consumerish to begin with, and this became yet another thing we could control.

This actually goes quite well with the story I posted a few hours ago.