Béatrice Fedor comments on the recent trend among abortion advocates to share “positive” abortion stories in order to “break the silence” and “remove the stigma”.

You can’t “remove” abortion stigma and shame but you can face what happened honestly and start to heal. There would be no stigma if what we call “abortion” were a beautiful, good, fulfilling life event. But as it is, abortion is a violent, destructive, demeaning, traumatic event that we (more or less freely) agree to. That’s why we feel guilt and shame. We are not whole anymore but we are told that we should be thankful because this is supposedly one of the greatest achievements of the women’s rights movement.

Abortion is not a victory, it’s a wound and a loss. The “positive abortion” movement is not telling the whole story and is not helping women. Encouraging us to pretend that nothing major happened keeps us in the darkness. Women who lost a child to abortion need to be restored and walk in the light.

Béatrice, herself, is a member of Silent No More — an awareness campaign in which women also share their abortion stories, but with a slightly different goal in mind: to make the public aware of the devastation abortion brings women and help them to find healing.

Here she is sharing her abortion testimony in front of a thousand people at the Stand up For life March and Rally in 2009 in Columbia, SC: 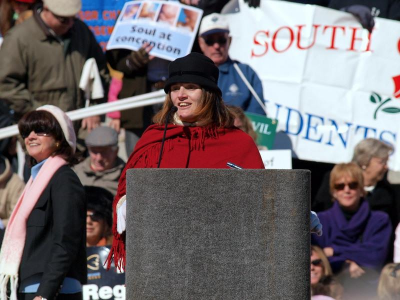 Beatrice blogs at 400 Words for Women where she shares her reflections on her journey and on our broken culture.