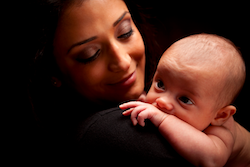 Over a year ago I wrote an article about why drug addicts should not be encouraged to allow themselves to be permanently sterilized. Sharing her personal story of being pregnant while addicted to crystal meth, Calah Alexander is an example of why sterilizing drug addicts is the wrong approach:

Don’t get me wrong, it wasn’t easy, being a newly-pregnant drug addict. But it gave me something to live for. Someone to live for.

Many times, women who are addicted to drugs manage to clean themselves up during the pregnancy only to fall back into old habits after the baby is born. This is why conventional wisdom states that a drug addict can’t raise a child, even if she manages to carry the baby safely, healthily to term.

In some women, this is doubtless true. But think of the message we’re sending those women.

You can’t do this. You are too weak to resist. You’re not a mother, you’re unfit to be a mother, we know you won’t make sacrifices for your child. Better for the child to not live at all than to be abandoned by a drug-addled mother. After all, what kind of life will she have. The daughter of an addict.
…
I vividly remember one day, three months after Sienna was born. I managed to get us both dressed and we went for a walk. I walked around our apartment complex, unconsciously making my way to a friend’s apartment with drug connections. Before I had really decided to do so, I was knocking at his door. No one was there. I sat on a bench across from his apartment and waited. I waited for an hour, my mind racing all that time. I couldn’t get over the one, obvious hurtle. If I were to use drugs again, I couldn’t breastfeed the baby. But what excuse could I give for not feeding her? What excuse would I have for using formula? And what if the Ogre figured it out? What if he told my parents? Would the drugs really enter the breastmilk? Would it affect her too much? Couldn’t I just smoke a little bit, and then see if she acted funny?

In the midst of this frantic train of thought, I happened to look down at my daughter. She was sleeping, her soft pink mouth open, her little hand curled up against one fat, rosy cheek.

She was absolutely beautiful, and absolutely perfect. I knew the hell of drug use, and in that instant I knew that I could not do that to my daughter. I couldn’t let that horror into her tiny, flawless body.

She opened her eyes, yawned, and smiled at me. It was a rare thing for her to smile at me. I was an absent mother, a source of food. We had almost no relationship at all. But at that moment, for the first time, I loved her. I picked her up and held her closely, shaky and nearly weeping from the adrenaline that had been coursing through me. Just as my friend’s car pulled up I held Sienna in one arm, turned the stroller around and went home.

From that moment on my half-formed plans to use drugs again began to dissipate. It took years before they were gone completely, and even still, on bad days, the thought sometimes pops into my head, unbidden and quickly chased out.

But my daughter saved my life. She saved me from that terrible crisis. The people around me didn’t say, “You can’t be a mother. You can’t parent. You’re addicted to crystal meth, there’s no hope for you.” They said, “You are a mother now. This is your child. You can, and will, raise her.” And I did. I am.

It’s not that I think addicts should be encouraged to get themselves or their wife/girlfriend pregnant in the hopes that it’ll help turn their lives around. Nevertheless, new life is new hope, not a problem to be eliminated. Substance abuse is the problem. Sexual immorality, and in many cases sexual abuse, is the problem.

Eliminating the possibility of children being born is not an answer to either of these problems. As Calah notes, this just sends the message that they’re too weak to ever get over their addiction. People with addiction need support, compassion, love — community — whether they’re experiencing a crisis pregnancy or not.

As it’s name suggests, that’s just what the Comunità Cenacolo is for young people with addictions of all sorts. It’s community. It’s family. It’s love. It’s hope. Not only are they dedicated to reaching out to drug addicts and their families, but their services are free and, through prayer, hard work and personal outreach, they provide for the underlying reasons many of these people turn to drugs in the first place – loneliness, low self-esteem and sense of self worth, selfishness and, of course, lack of faith. It is a “school of life”, providing for the complete person, not just helping them get “off drugs” but giving them the tools to deal with their defects when they re-enter the world and all its temptations. This is the kind of healing that needs to take place in order to truly build up a culture of life!