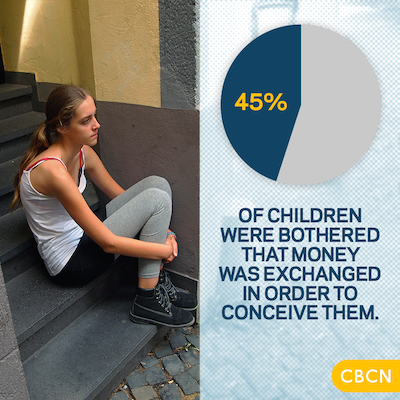 When I re-posted this graphic from the Center for Bioethics and Culture (using data from this study) on Facebook someone objected to it, concerned that something like that might be harmful to her adopted son if he ever came across it. Causing him to feel shame since his parents had to pay money, as well.

I understand her concern, especially since her son is still quite young. But the graphic clearly says “in order to conceive them,” which is the major difference between adoption and third party reproduction (3PR).

Yes, money is exchanged in both situations — but one is (ideally) a worth-wile attempt to make the best of a bad situation for an already born child in need; the other deliberately contracts the creation of a child to fulfill the wants and needs of the parents.

Having many friends who have lovingly opened their hearts and homes to children in need, I understand that on the surface there can seem to be similarities between these two issues (money changes hands, children want to know where they came from, etc…), and I try to be sensitive to that.

I also try to be sensitive to those I know who have themselves or have loved ones who have used 3PR with only the best intentions in mind.

Nevertheless, the statistic above is real.

More and more children of 3PR are speaking out about the injustice and indignity of their very existence being the result of a business contract and these children deserve to have their voices heard.

Alana Newman, who is a child of 3PR, has done a good job of explaining this, as well: