During a radio interview this morning about the coming 20th anniversary of Evangelium Vitae, I was reminded of something Archbishop Chaput said about the encyclical in his book Render Unto Caesar. 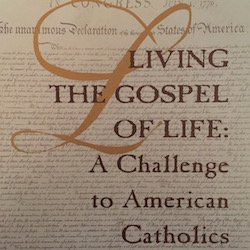 After explaining that the book was a response to someone who asked him to write down his thoughts about Catholics in public service to help people considering a political career, Chaput says:

The irony, though, is this: A very good guide to Catholic citizenship and public leadership already exists. The pastoral statement Living the Gospel of Life, issued in 1998 by the U.S. Catholic bishops — though it had to survive a great deal of internal friction and wrangling first — remains, in my view, the best tool anywhere for understanding the American Catholic political vocation. Catholics already know that politics exists to serve the common good. But what is the common good? It’s a thorny question. Some issues have more gravity than others. Some methods to achieve a good end are wrong in themselves. We can never choose them without coarsening the society we inhabit.

Public officials have a special responsibility in sorting these things out. That is why the health of our public life requires men and women of strong moral character in political service. No community understands this better than the Catholic Church, from centuries of both good and ugly experience. The genius of Pope John Paul II’s great 1995 encyclical, Evangelium Vitae (The Gospel of Life), is not that it gives us a specific, sectarian blueprint for building a moral society. It doesn’t. Rather, it offers a common architecture for humane political thought and boundaries for government action that cannot be crossed without brutalizing human dignity. When the U.S. bishops issued Living the Gospel of Life, they applied the best of John Paul’s encyclical to the American experience. Not surprisingly, no other document ever issued by the American bishops on political responsibility has the clarity, coherence, and force of Living the Gospel of Life. The only sadness is that so few Catholics seem to know about it. In fact, if this book does nothing more than lead more people to read and act on Living the Gospel of Life, it will have partly served its purpose. (Render Unto Caesar, p. 2-3)