This isn’t just another infertility story. This one includes a miracle from an obscure Medieval saint. 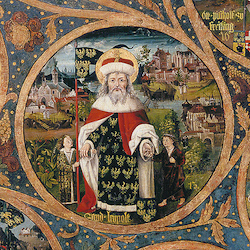 Over at Catholic Lane, Amy Bonaccorso writes about living with Poly-Cystic Ovarian Syndrome worries for years and then finally being told by her doctor that she had only a 5-10% chance of ever conceiving. Before going in to discuss possible treatment for her condition, she sent a prayer request to a priest who is a member of a community named in honor of St. Leopold. One month later, and a month before her appointment, she was pregnant!

St. Leopold is the patron saint of Austria and very little is written about him in the English language. He is patron of large families, death of children, and stepchildren. His family life explains his patronages. His first wife passed away at a young age and they had only one son together. His second wife, Agnes, lost her first husband after having 11 children. When the two widows married, they both became stepparents and formed a Medieval Brady Bunch. They had 18 children together, and tragically, lost seven.

A most virtuous ruler, Leopold was offered the role of Holy Roman Emperor and declined. This is perhaps the most impressive fact I have found about him. He was politically astute and ushered in an era of peace. A devout Catholic, he built monasteries and helped to resolve the Investiture Controversy.

It turns out this isn’t the first time St. Leopold has helped someone have a child. As Amy researched the saint further, she found out that, 16 years before his formal canonization, Albrecht, Habsburg duke of Austria, traveled to Leopold’s shrine to thank him for the birth of a son on November 15, 1339.

Since Leopold’s life was dedicated to raising such a huge brood of children, it is natural that he would take a special interest in baby requests. If you or anyone you know is praying for a child, Leopold’s intercession can’t hurt! Now is the time to mark your calendar for a novena. Start praying on November 7th to end on November 15th, his feast day.

Other patron saints for childless couples.
The Catholic Church is No Enemy of Science or the Infertile