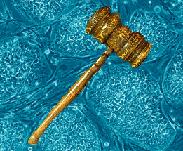 Last week, the United States Supreme Court declined to hear a case challenging the legality of Barack Obama’s expanded government support of human embryonic-stem-cell research. Plaintiff’s in the case, which was first filed in a lower court in 2009, revolved around the prohibition by Congress of funds for “research in which an embryo is destroyed, discarded or injured”, a phrase in the Dickey-Wicker amendment enacted by Congress every year since 1996.

Rebecca Taylor has a good article with a good history of US Federal ESCR funding, this lawsuit and why the Dickey Amendment is so important (it’s not just about stem cell research).

I have written about this extensively here, as well.

Suffice it to say, currently the United States, which most people consider behind the rest of the world when it comes to stem cell research, has absolutely no laws banning or even restricting research that involves the creation, use and destruction of nascent human lives. The only thing we have here is Dickey which prohibits the funding of such research.

The original ruling on this lawsuit from district court judge Royce Lamberth was correct: “If one step or ‘piece of research’ of an E.S.C. research project results in the destruction of an embryo, the entire project is precluded from receiving federal funding.” President Obama’s executive order and the NIH’s subsequent new guidelines violate Dickey by allowing funding for research using new cell lines after derivation using other sources of funds. The ending of this case in favor of the Obama administration and the NIH means that a your tax dollars will be responsible for a great deal more human embryos being destroyed in this research.

Unfortunately, these days it seems that many pro-lifers almost dismiss embryonic stem cell research as a major threat anymore because it hasn’t been as “successful” as it’s more ethical counterparts. We have certainly seen some encouraging developments in recent years — most notably the announcement that one of the largest biotech companies in the US and the first to start trials using embryonic derived stem cells in human patients was dumping its entire ESCR program — but scientists are far from abandoning research that cannibalizes tiny human beings altogether. While Geron scrapped it’s trial on spinal cord patients, another human trial using ESCs to treat macular degeneration is still currently underway and word is Geron’s now defunct ESCR program could be purchased by another company and the human trials it started recommenced. Let’s also not forget that regenerative medicine is not the only thing scientists are interested in using these stem cells for.

It’s bad enough that, unlike other, more progressive countries the United States has no laws protecting the smallest of our species from being torn apart in the name of science, the least we can do is enforce the one law we do have preventing taxpayers – many of whom have serious moral and ethical objections to it – from footing the bill for such research.

If you’re interested, the Family Research Council has links to the various filings and some stories, going back in time to the origin of the case.