Cool. Here is an excerpt from the first chapter of Christopher West’s forthcoming book Fill These Hearts: God, Sex and the Universal Longing 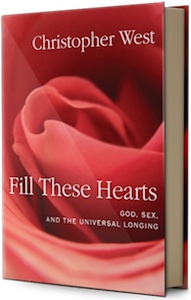 In 1977 NASA launched Voyager 1 and Voyager 2 to explore the galaxy. A golden record called The Sounds of Earth was affixed to each of the twin spacecrafts— a message from earth to anyone out there in the universe who might be listening. It contained both music and the sound of a human heartbeat.

Annie Druyan served as the creative director of NASA’s famous Voyager Interstellar Message (VIM) Project. Along with Carl Sagan and a few others, she was entrusted with the task of coming up with earth’s message to the rest of the universe. Reflecting on the experience in a 2009 interview, she recalled,

The first thing I found myself thinking of was a piece by Beethoven from Opus 130, something called the Cavatina Movement … When I [first] heard this piece of music … I thought … Beethoven, how can I ever repay you? What can I ever do for you that would be commensurate with what you’ve just given me? And so, as soon as Carl said, “Well, we have this message, and it’s going to last a thousand million years,” I thought of … this great, beautiful, sad piece of music, on which Beethoven had written in the margin … the word sehnsucht, which is German for “longing.” Part of what we wanted to capture in the Voyager message was this great longing we feel.

A song of human longing launched into space … It’s all the more poignant based on the Latin root of the word “desire” (desidere — “from the stars”). It’s as if NASA’s scientists were saying to the rest of the universe: “This is who and what we are as human beings: creatures of longing.” And hidden in that basic “introduction to who we are” seems a question for extraterrestrials, almost a test to see if we can relate to them: Do you feel this too? Are we the only ones? Are we crazy?

Perhaps even more we wanted to say to any other intelligent life out there, “If you feel this longing, this ache for something too, what have you done with it? Have you discovered anything that can fill it or cure it?” As Annie Druyan relates, “We were hoping that, you know, maybe things like passion and longing … are not just limited to our narrow experience but might be something … felt on other worlds.”

And how best to communicate that longing we feel? Music. “We thought that the vibrations of the music would speak for us in ways that the machine itself and maybe the pictures and the other things that we had to offer wouldn’t,” explained Druyan.

A description of the book from West’s website:
Fill These Hearts blows the lid off the idea of Christianity as a repressive, anti-sex religion and unveils the hidden truth of life- that the restless yearnings we feel in both our bodies and our spirits are the very cry of our hearts for God. Coming Jan. 8, 2013. Start the journey.