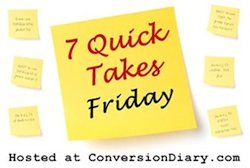 1. I’ve seen quite a few stories about birth control lately. Why not make a quick takes post out of all of them, plus a few other related items?

2. First thing’s first: For quite some time now, the link between hormonal contraceptives and an increased risk of breast cancer has been acknowledged by the Mayo Clinic and the World Health Organization

3. Not sure why this popped up in one of my news feeds recently, but here’s an April 25, 2012 CBS News headline: Injectable contraceptive doubles risk of breast cancer, study shows

5. Here’s another older one that I saw shared on Facebook today – via Wired.com July 28, 2010: Birth Control Messes With Monkey Business

6. The previous article is not the first study of how primates react to hormonal contraception. In this video Dr. Janet Smith cites a similar study by Prof. Lionel Tiger from the early 1970s:

7. Finally, over at Faith and Family Live, Rebecca Teti breaks down a new study on Catholic women and contraception: Why Do So Many Catholic Women Contracept? Very enlightening and, despite the still high numbers of Catholic women not following the Church’s teaching on this matter, a little hopeful.

That’s it! Head over to Conversion Diary for more QTs.