Last week, Trista from Not a Minx, a Moron or a Parasite, wrote a brave and brutally honest guest post for the Real Catholic Love and Sex blog about the anxiety she sometimes had when she thought about her potential wedding night. 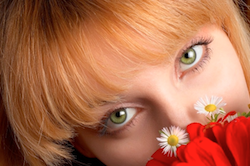 My thoughts were jumbled and erratic: Couldn’t there be another way to produce offspring? I asked God. Are you sure this is it? Why is this act the full gift of self?? It’s so vulnerable, Lord, and so…foreign. I’m not sure I can do this. I’m shy. It seems so overwhelming to go in the span of hours from chastity meaning clothes-on-careful-kissing to chastity meaning here-i-am-fully-naked-when-i-haven’t-worn-less-than-a-once-piece-bathing-suit-in-public-in-five-years-and-am-having-sex. Plus, my boyfriend has had past partners, all of whom, I’m convinced, looked like Victoria Secret models and had Cosmo memorized. I can’t compete. I don’t want to compete. I’m terrified. Is an abstinent marriage a possibility? I don’t know what to do during sex, and I’m not coordinated, and I really don’t want to be embarrassed. It seems rife for humiliation. And, Lord, whenever I bring this topic up, everyone looks at me like I have three heads. I’m a freak. Alone in this matter. No one has ever been overwhelmed by the thought of it? Maybe I am not called to marriage. Maybe this is not for me.

I had to laugh out loud when I first read Trista’s post because I have had very similar thoughts myself and wondered if I was alone and weird for having thought them.

Like Trista, my image of sex has been tainted by popular culture (and, unlike Trista, past experience). I know I don’t want what the world has to offer, but, despite what I’ve learned about Theology of the Body since first hearing about it seven years ago, it’s still hard for me to imagine sex being, of all things, holy, even within marriage.

Anyway. Go read the rest of Trista’s lovely post in which she goes on to talk about asking St. Gianna for help getting over her fear and offers some advice for those of us who also need courage.