The preface to Tim Muldoon’s latest column at Patheos reads: This is the myth of all myths: that people could use each other and still remember what compassion and tenderness looked and felt like.

What follows is a very creative little narrative of the fall and how men and women lose their sense of compassion the more they try to control and manipulate each other: 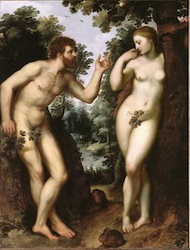 In the beginning, the LORD created man and woman in his image.

He blessed them and made them fruitful. Among his many gifts he gave man the gift of physical strength to work, and he gave woman the gift of compassion to cultivate relationships.

Together, man and woman learned each other’s gifts. Woman developed strength and offered her work as an act of compassion. Man learned compassion with his wife and child.

And they and their offspring numbered like the stars in the heavens, and they were happy. And the LORD saw that it was good.

But the serpent, the most cunning of creatures, was jealous of their happiness, and he resolved to put enmity between the men and the women.

So he whispered in the ear of the men as they lay asleep: “You are a man. Use your power to control the woman.”

And he whispered in the ear of the women as they lay asleep: “You are a woman. Use your body to control the man.”

So the men began to use their power to control the women. They kept the women away from their work. And the women stayed at home.

And the women began to use their bodies to control the men. They seduced the men and made them do their bidding.

Read the rest! This is part nine in his series on Sex and Christianity. Visit the home-page for his Patheos columns to find 1-8.