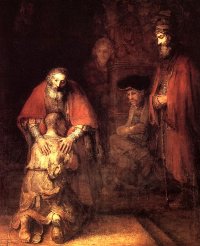 Ah, Lent! That time of year when we spend a little more time than usual reflecting on how much we have distanced ourselves from God by our sin. Personally, I can easily get discouraged and even disgusted with myself when we think about the many ways I have chosen darkness over light. But, the Lenten season is also preparation for the greatest Act of forgiveness and proof of God’s great love for each one of us, even in our sinfulness.

Lent is not just a time of reflection, but a time for renewal and reconciliation. A time to go to confession, be sorry, be cleansed and, as St. Josemaria liked to say, begin again (something we probably should be doing all throughout the year, anyway). Therefore, this Lent let us not be despair as we recognize our faults and failings, but humbly accept the limits of our human nature, let go of our sins and allow ourselves to be forgiven and transformed by God’s love and mercy.

Over at the TOB Institute website, Fr. Ben Bradshaw has a great meditation for the beginning of the Lenten season: 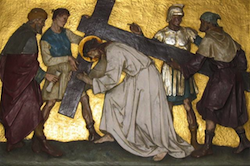 While it is certainly true to assert that Lent is a time of sacrificing somehow as a way of uniting our suffering with that of Christ, it is easy to forget that our mission in doing so is to seek genuine intimacy with Jesus Christ on the Cross and to unite our sufferings with his. In his Apostolic Letter Salvifici Dolores/On the Christian Meaning of Human Suffering (February 11, 1984), Blessed John Paul II notes that in the experience of suffering we, ourselves, are transformed into better men and woman, while simultaneously growing closer to Jesus Christ:

Christ drew close above all to the world of human suffering through the fact of having taken this suffering upon his very self. During his public activity, he experienced not only fatigue, homelessness, misunderstanding even on the part of those closest to him, but, more than anything, he became progressively more and more isolated and encircled by hostility and the preparations for putting him to death…Precisely by means of his Cross he must strike at the roots of evil, planted in the history of man and in human souls. Precisely by means of his Cross he must accomplish the work of salvation. This work, in the plan of eternal Love, has a redemptive character.