Most of the time I’m on here trying to get pro-lifers to think outside the abortion box. However, I do understand that, as life issues go, abortion is a special kind of evil.

The intentional killing of an innocent human life in what should be the safest place in the entire world — it’s mother’s womb.

Instead of a sacred, life-giving vessel, the mother’s womb has become a hostile environment, allowed to be penetrated and injected with toxic chemicals and instruments that assault the baby’s body to the point of death.

“If we accept that a mother can kill her own child,” Mother Teresa said, “how can we tell other people not to kill each other?” Indeed.

Not only that, but by blessing the killing of the obvious child in the womb, we have no moral grounds upon which to object to killing or manipulating human embryos in a test tube, no way to object to the use of aborted fetal tissue in research. 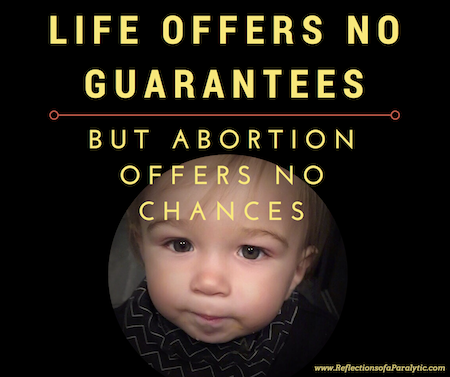 Every child deserves a chance.

On this 43rd anniversary of Roe v. Wade, a s/o to my baby sister for giving both my nephews a chance (neither of whom were conceived under the most ideal circumstances) and the rest of us a chance to fall in love twice.