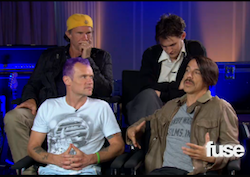 I love me some RHCP. During an appearance On the Record with Fuse, frontman Anthony Kiedis told host Touré what it’s like being a member of the fatherhood “club”:

“I love the club. Good God, it’s a beautiful club. Who knew? You can’t know until you go. It’s wild.”

He also challenged the notion that having children stifles one’s freedom:

via: People Magazine <--with video