This is just lovely. From this month’s Magnificat magazine: 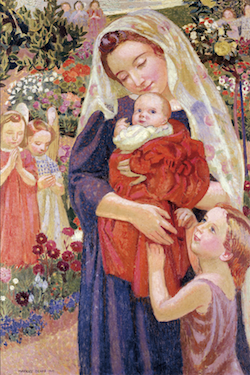 Founder of the Nabis movement, then of the Studios of Sacred Art with Georges Desvallières, and a member of the Third Order Dominicans, Maurice Denis knew how to combine the cutting edge of modernity with the highest Christian inspiration. His Madonna in the Blooming Garden reflects his meditation on the mystery of the grace of paradise. At first sight, such grace seems irretrievable, but not to the eyes of an artist persuaded that it has been brought within reach again by Christ’s resurrection. In this sense, in the background of this painting, Denis depicts a marvelous garden, certainly not paradise lost with its wild and primitive beauty, but an earthly paradise that man has tilled and tended “by the sweat of his brow.” In this new Eden, where all the fresh possibilities of masculine endeavor coincide with constant labor, Denis places “woman” as the one who has received the power to re-enchant the world simply by being faithful to the grace of her femininity. Here, all that is feminine reflects original innocence – the very innocence that will merit the glory of the Assumption. In the simplicity of her purity and the splendor of her maternity, the Madonna is just a young maiden; she is surrounded by angels who are little girls and by little girls who are angels. The fruit of her womb is still a babe in arms, yet paradoxically he is the only one whose eyes are wide open to the reality of the exterior world. His gaze of goodness is cast beyond the borders of the paradisiacal scene and into this valley of tears, which will carry on in travail until the end of time. And so it must be, since we continue to live as if we have not been saved.
■ Pierre-Marie Varennes

It makes me think of this quote from Abp. Fulton Sheen on woman: