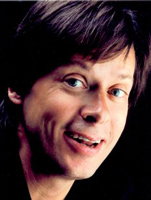 Check out Dave Barry’s Complete Guide to Cloning – he is not making this up:

Human cloning: Will it be a lifesaving scientific advance, like penicillin? Or will it prove to be a horrible mistake that unleashes untold devastation upon humanity, like the accordion?…

A. In scientific terms, it is a procedure by which a theoretically infinite number of genetically identical organisms emerge, one at a time, from a Volkswagen Beetle.

A. Whoops! Our bad! Cloning is a procedure whereby scientists, using tweezers, manipulate DNA, which is a tiny genetic code that is found in all living things as well as crime scenes that have been visited by O.J. Simpson. A single strand of DNA can be used to create a whole new organism, as was proved when scientists at Stanford University took DNA from the fingernail of a deceased man and grew a six-foot-tall, 190-pound fingernail. Unfortunately, it escaped from the laboratory and held police at bay for hours by screeching itself against a blackboard. It was finally subdued by National Guard troops equipped with earplugs and a huge emery board.

Q. Have scientists cloned any other organisms?

A. In 1997, a group of Scottish scientists cloned a sheep named Dolly, which was genetically identical to the original sheep.

Q. How could they tell?

A. They had the original farmer take a hard look at it, and he said, quote: ”That’s her, all right!”

A. Of course, he said the same thing about one of the scientists.

Q. Have there been any other successful cloning experiments?

A. Yes. In 1995, scientists in Florida used a single of strand of DNA from the Backstreet Boys to form `N Sync. Or maybe it was the other way around.

Q. What about humans?

A. We are getting very close. Recently, a firm in Massachusetts announced that it had cloned some human embryos. However, these embryos were alive for only a few hours, and stopped growing after they had formed microscopic six-cell spheres.

Q. What did the firm do with them?

A. They are currently working in Customer Service.