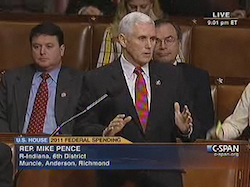 The House is debating the Pence amendement to defund Planned Parenthood right now. According to their 2008-2009 Annual Report, Planned Parenthood received over $350 million from American taxpayers, a number that has been steadily rising over the years, and with it the number of abortions Planned Parenthood has committed. Planned Parenthood is in the business of killing human beings and many of their other services and practices not only do not contribute to the medical common good, but help advance the culture of death as well. There is no good reason for them to receive money from the Federal Government!

*update* Good grief. It’s 11 pm and debate on the Pence bill has finally ended…without a vote! I gotta say, Congressional debates get old and repetitive after a while, but some Representatives do manage to keep things…interesting: Democrat Rep. Gwen Moore: Abortion is better for unplanned babies than having to eat Ramen noodles