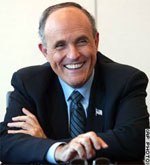 I suppose it’s time to put in my two cents on this matter. I have made it no secret that I am thoroughly opposed to Rudy Giuliani becoming the Republican presidential nominee. That is my primary focus right now. There are many people who think that Rudy does not have a chance, at this point, to win the nomination because his numbers have been dropping and the potential liability he will be to Republicans in the general election. Let’s pray that is the case.

That being said, he is still at the top of the pols even after Fred Thompson’s much anticipated entry. So the inevitable question becomes, what if Rudy defies the odds and in fact becomes the Republican nominee? The nations Christian leaders have answered by saying that they will still refuse to support the man and push for a third party candidate.

In my opinion this has less to do with Giuliani – the man and the candidate – as it does their general disappointment in the entire Republican Party which is consistently moving further away from traditional conservative values despite disingenuous campaign promises.

Don’t get me wrong, there are still a few good men out there – one or two of whom I wouldn’t mind seeing on the ballot next November. I am also happy with the job the current President has done with the pro-life issues he’s faced in the last seven years, not to mention his picks for the Supreme Court. However, as I listen to Republican pundits on TV and some prominent talk show hosts, it seems the priorities of the mainstream Republican Party have changed. If nominated as the best representative of the Party, Giuliani, a pro-abortion, pro-gay rights Republican, may be the last straw for this camel’s heavily burdened back.

I am deeply concerned about the prospect of a President Hillary Clinton and feel quite nauseous at the thought of the kind of justices she would nominate to the Supreme Court. But I am not overly convinced that Rudy Giuliani’s nominations would be much better. Call me skeptical, but I highly doubt that he will give us the anti-Roe majority that we seek.

Regardless of all of this, our focus right now must be on success at the primaries. I like this post at the Evangelical Outpost about how irrational it would be for Republicans, even those who like him, to vote for Giuliani in the primary election.

National Review
Stranger In A Foreign Land
The Mod Blog
Pro Ecclesia
The Catholic Knight – who left the Republican Party, in favor of the Constitution Party, just this year

Opposing the conservative leaders’ decision:
The Anchoress
Stones Cry Out

4 Comments on “Christians Against Rudy”