Today we celebrate the Solemnity of the Annunciation, when the Archangel Gabriel appeared to Mary and announced that she had found favor with God and would conceive and bear a son who would be called the Son of the Most High. This day calls to mind two very specific moments which correspond with the culture of life. 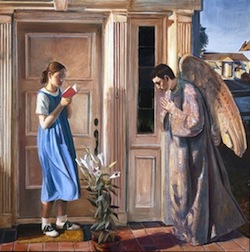 The first is Mary’s response to the Angel’s message. Imagine that you are a young girl – roughly between the ages of 12 and 15 – not yet married and an angel of the Lord informs you that you shall be with child.

This surely was not something that she would have ever expected and most likely did not understand at the time. It was also likely to cause her and her family great shame and scandal. But Mary, being “full of grace”, surrendered humbly to God’s will saying, “Behold, I am the handmaid of the Lord; let it be to me according to your word,” (Lk 1:38).

By accepting this precious gift of life, Mary become not only the Mother of God, but a supreme example to all mothers. Mary’s role as the Mother of God reveals the dignity and sacredness of maternity. May all pregnant women imitate Our Lady’s gracious acceptance of new life and all women have recourse to this perfect example of authentic femininity.

Secondly, Mary’s fiat marks the exact moment of the incarnation, the Word Made Flesh. By the Incarnation, Christ, the Son of God, intimately united Himself to the entire human race and revealed, in the words of JP II, the incomparable value of every human person. Not only did Christ elect to take on our human nature, becoming like us in all things but sin, but he chose to begin his life on earth as the weakest and 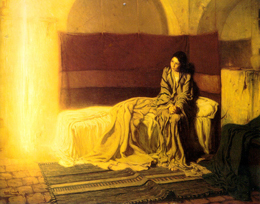 most defenseless among us, an unborn child.

Because of this saving event we realize the splendor of all human life – including the unborn child and the unformed embryo. “[O]nly in the mystery of the incarnate Word does the mystery of man take on light” (Gaudium et Spes 22). Let us pray on this day that such innocent life may once again be preserved and protected in our Nation through the intercession of this Immaculate Mother, Patroness of our Land.

See also:
Today is the International Day of the Unborn Child.
The Angelus: A Perfect Pro-Life Prayer

Therefore the Lord himself will give you this sign: the virgin shall be with child, and bear a son, and shall name him Immanuel (Is. 7:14)

The Annunciation – Luke 1:26-38
In the sixth month, the angel Gabriel was sent from God to a town of Galilee called Nazareth,to a virgin betrothed to a man named Joseph, of the house of David, and the virgin’s name was Mary. And coming to her, he said, “Hail, full of grace! The Lord is with you.” But she was greatly troubled at what was said and pondered what sort of greeting this might be. Then the angel said to her, “Do not be afraid, Mary, for you have found favor with God. Behold, you will conceive in your womb and bear a son, and you shall name him Jesus.
He will be great and will be called Son of the Most High, and the Lord God will give him the throne of David his father, and he will rule over the house of Jacob forever, and of his kingdom there will be no end.”
But Mary said to the angel, “How can this be, since I have no relations with a man?” And the angel said to her in reply, “The holy Spirit will come upon you, and the power of the Most High will overshadow you. Therefore the child to be born will be called holy, the Son of God. And behold, Elizabeth, your relative, has also conceived a son in her old age, and this is the sixth month for her who was called barren; for nothing will be impossible for God.”
Mary said, “Behold, I am the handmaid of the Lord. May it be done to me according to your word.” Then the angel departed from her.