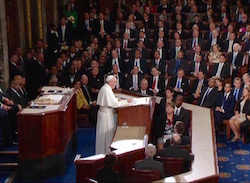 In his address to Congress last month, Pope Francis expressed concern for the family, which he says is “threatened, perhaps as never before, from within and without.”

He particularly called attention to, “those family members who are the most vulnerable, the young.” The children. When society starts messing around with the meaning of marriage and family, it’s always the children who suffer the most.

“For many of them,” the pope said, “a future filled with countless possibilities beckons, yet so many others seem disoriented and aimless, trapped in a hopeless maze of violence, abuse and despair. Their problems are our problems.”

Their problems are our problems. This is easy enough to see with regard to divorce and broken homes, but the Holy Father’s words reminded me of some of the more forgotten victim of today’s “new normal” — the children of assisted reproduction.

I recently came across a video of Millie Fontana, a “donor conceived child of lesbian parents,” giving a first-hand account of “The Cost of Equality” in Melborne, Australia this year.

“Nobody wants to hear about the ‘other side’ of the rainbow.”

Hollywood and the same-sex marriage lobby desperately want to push this The Kids Are Alright narrative, so children in Fontana’s position, she says, are shamed for coming forward. Silenced by people telling them what’s acceptable for them to feel.

To suggest that a child needs both a mother and a father is now somehow “homophobic” — even when you are that child. 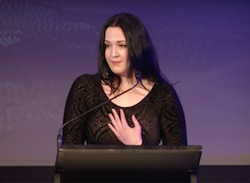 “Was I ‘homophobic’ when I was looking in the mirror wondering where my father was?” Millie asks. “Was I homophobic when I looked at both my loving parents and pleaded with them to tell me who I was?”

It wasn’t about just fantasizing about having a father, but of putting a face to who she was. Of no longer looking in the mirror and wondering “where did I get these green eyes. Where did I get some of these aspects of my personality…that neither of my parents in the home had?”

As a result of her parents deliberately withholding information about her biological father growing up, Fontana said that, it was extremely difficult “to affirm a stable identity…And my behavioral and emotional stability suffered greatly because of it.”

It is interesting to note that Fontana is a self-proclaimed atheist, but “stands with Christians” in this debate because so far, “Christians are the only people trying to reflect the issues that follow with children.”

The Church’s position here is not based on “homophobia” or punishing same-sex couples, but on every human being’s fundamental right to know who they are and where they came from.

There are many different acts through which children can be conceived (the marital embrace, rape, fornication, adultery, incest and various technical procedures) but only one way is in keeping with the dignity of the child. Which is why the Catechism states that very human being has a right to be conceived in an act of love and “born of a father and mother known to him and bound to each other by marriage” (CCC 2376, my emphasis added).

Fontana is not alone and much of what she describes experiencing is not entirely unique to children of same-sex parents. Thousands of donor-conceived people — those born to same-sex couples, single mothers and even many who have both a mother and a father, one or both of whom are not their biological parent — are growing up today with a deep longing to know where they came from, who they look like, whether they have any biological siblings and sometimes even why they’ve developed some genetic disease.

Many of them, like Fontana, are speaking out about being unfairly stripped of their right to a connection to their biological roots. And, sadly, most of them are met with the same dismissive and sometimes even hostile response.

Not enough studies have been done on the long-term effects of anonymous sperm and egg donation. So, whatever you think about same-sex marriage or third party reproduction, it is important to give people like Millie (and Alana, and Lindsay, and Jessica and many more) a fair hearing so that we can fully understand the ways in which this technology affects the children involved.