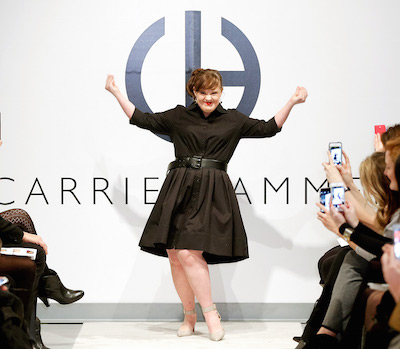 American Horror Story actress Jamie Brewer made New York Fashion Week History when she strut her stuff down the runway this Thursday. Brewer is the first model with Down Syndrome to walk the fashion week’s catwalk.

Hammer was inspired to include Brewer in this year’s show when Katie Driscoll, cofounder of the nonprofit Changing the Face of Beauty, which lobbies brands and companies to integrate those with disabilities into their advertising, wrote to her asking if she would include a role model for her daughter who was born with Down syndrome.

“People with disabilities are the largest minority in the world,” Driscoll told BuzzFeed Life. “We have a long way to go, but we are definitely on the right track. We’re so thankful for people like Carrie who believe. For her to give Grace a role model, there’s no words.”

Prior to her roles on television, Brewer participated in theater productions in her home-state of Texas where she was also an advocate for people with intellectual disabilities. At 19 she was elected to the State of Texas ARC Board, and she also worked with the Governmental Affairs Committee for the State of Texas, as the only member with a disability.

“Jamie is an incredible actress and also an activist, an artist and a writer who just happens to have Down syndrome … but that doesn’t define her,” Hammer told ABC News.

“Jamie really shows everyone that you can become what you imagine,” Hammer said. “I hope that, watching her, young women know they can become anything, do anything. Your circumstances don’t define you.”

In an age where the cult of normalcy not only decides who is beautiful, but also asserts its power over the weak by ultimately deciding who gets to live and who must die based on its own arbitrary utilitarian standards, Hammers’ work and passion for inclusiveness is a deep breath of fresh air.

Another first for Fashion Week this year: 25 year old Jack Eyers, British personal trainer who had leg amputated when he was 16, will become first disabled man on the fashion show’s runway. Eyers will model clothing by designer Antonio Urzi.

‘I have no idea what to expect, so it’s pretty overwhelming,’ Eyers told the UK Daily Mail. ‘I just want to show that having a disability doesn’t need to hold you back.’