Commenting on gender reassignment as “treatment” for people with gender identity issues a few years ago, Wesley Smith said:

People want to be fulfilled and lead happy lives as “themselves.” Very well. But I also worry that once we accept the premise that we have a fundamental right to be physically remade to comport with how we feel about ourselves—and to have society act in accordance—we will have crossed a cultural Rubicon, leading to extreme outcomes. 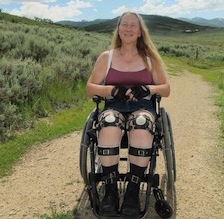 It’s a “slippery slope” concern that’s not totally without merit. Consider: the mental illness once known as body integrity identity disorder, that now goes by the catchy new moniker “transability“.

Such word engineering suggests that this may very well be the next stage in radical self-recreationism?

Typically, people with BIID do not accept one or more of their own limbs and seek to amputate them. But, “transabled” seems to encompass any otherwise able-bodied person who wants transform his or her body to obtain a physical impairment.

“No doctor would ever cut off a healthy limb!”, you say. They already have in a few isolated cases. And its being proposed on a wider scale. Along with snipping spinal cords and other such nonsense.

“Okay, but, society would never allow such a thing to become mainstream,” you protest. No? Just look how easily the media has already slipped into the term “transabled.” It may only be a matter of time.

These are “transient times“, indeed.

I wrote about this a few years ago:
Transhumanism: Amputating Healthy Limbs
UK Woman Wants Spinal Cord Cut
Wanting to be Disabled?

*IMG: Chloe Jennings-White wears leg braces and uses a wheelchair…even though her legs are fine.