It’s not what you think.

A while back I wrote an article entitled “Reproductive Rights Run Amok“. This is precisely what I was talking about. 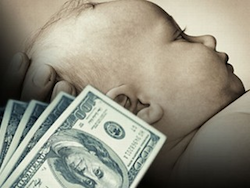 After naturally conceiving and giving birth to three boys Jayne Cornwill and her husband traveled to America and pay fertility doctor Daniel Potter to finally give them a girl. In a first-person piece published in the Sydney Morning Herald, Cornwill says:

I know that, to a childless woman struggling with infertility, I might seem ungrateful because I already have three healthy sons. But unless you’ve experienced “gender disappointment”, you can’t understand how crippling it can be. My desire for a daughter caused me to spiral into depression and left me virtually housebound. Every time I went out, toddlers in pink seemed to taunt me.

Cornwill claims that her “only goal in life” ever since she was little was to have a daughter and says that during her third pregnancy she was so “crippled” with disappointment that it was going to be a boy, she considered having an abortion.

Well, won’t that do wonders to her boys’ self esteem when they find out about this, which they are bound to at some point.

Note that they didn’t just have embryos made of her desired sex, rather they had multiple offspring created of both sexes and then discarded the boys. That’s how sex-selective IVF works.

Note also that they came all the way from Australia to the Brave New United States for this, where the fertility industry remains laughingly unregulated. And she’s not alone. According to Cornwill, Dr Daniel Potter, the US fertility specialist who treated them, has helped more than 1000 Australian couples “gender balance” their families.

Now that her obsession with having a daughter is finally a reality, Cornwill is lobbying for gender selection to be legalized in Australia. “It’s not about playing God,” she assures us, “it’s about giving women reproductive freedom.”

Oh, that’s a relief. “Because a child’s whole reason for living is only about a mother’s freedoms, not about their own” –Rebecca Taylor.

When I first read this last month, I was hoping I had stumbled upon an Onion article or some other satire news site. But, no. This is the “reproductive rights” movement come full circle.

Well, almost. Just wait till they get better at human cloning. Won’t be too long, now.