Not only was he several high profile, high paying speaking engagements and interviews to defend his actions and spread his poisonous pro-euthanasia/assisted suicide beliefs, but he also got to rub shoulders with the rich and famous when a movie about his life and “cause” was nominated for and won a few of Hollywood’s elite awards.

Kevorkian wasn’t just a killer. He was a very disturbed man who was obsessed with death and human experimentation. An obsession proven not only by his chosen “profession” but also his “artwork” that is currently on display at an art gallery in Los Angeles. 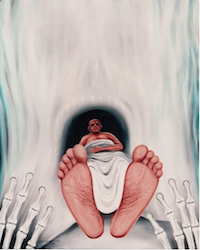 “The Last Paintings By Jack ‘Dr. Death’ Kevorkian” at the Gallerie Sparta is showcasing 11 original oil paintings of the late suicide enthusiast. Many of these paintings depict some aspect of disease and human suffering. One, called “Coma,” depicts an unconscious patient, silhouetted by an ominous pair of skeletal hands, being sucked into a death mask which resembles a CAT scan machine.

Each Painting comes with a price tag of between $28-45k. All of the proceeds will go to his estate and the West Hollywood gallery where they are being sold. Whatever does not get sold will reportedly be donated to the Smithsonian.

The exhibition also includes the assisted suicide machine that Kevorkian designed and built (pictured here). That’s right. The very same contraption helped inject a series of lethal drugs into over 100 terminal — and some non-terminal — patients. It too is for sale to the highest bidder with a starting price of $25,000.

Gross. I can’t even.

The most unsettling thing about the whole “cult of Kevorkian” is that the man is honored not despite, but precisely for being a killer. He is hailed as an advocate for the “rights” of the terminally and seriously ill.

News stories even speak of his “efforts in the field of medicine and bioethics” without a hint of irony, giving credence to Kevorkian’s claim that what he was proving was “a medical service.”

Death, as I have said many, many times, is not medicine. It cannot be said that euthanasia, assisted suicide or any sort of “mercy killing” eliminates suffering. Rather, what it does is eliminate the person who suffers.

Things like this destroy humanity. Our duty as human beings is to love and care for the suffering, not kill them. That a man like Kevorkian is heralded by so many, even after his own death, for doing just the opposite doesn’t speak well of the state of our current society.