As if third party reproduction hasn’t confused the make-up of the family enough already, we now have grandmothers giving birth to their own grandchildren (and also, in some cases, freezing their OWN eggs for their infertile daughters to use later on in life!). 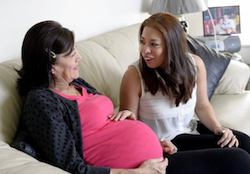 The latest: a 58 year old woman in Utah is currently pregnant with her daughter’s child. Said the 32 year-old Lorena McKinnon,

“The psychologists wanted to make sure we knew what we were getting into — that we were mentally prepared. Mostly, surrogacy contracts are with people you don’t know. It was weird to have a contract with my mom”

Weird doesn’t even begin to describe it. I mentioned this to a friend of mine recently and his initial reaction was, “gross!” Indeed.

Here is another such story out of my old hometown, Jefferson City, MO:

As troubling as this story is in general, it’s these words, specifically, from Dr. Gil Wilshire with Mid-Missouri Reproductive Medicine and Surgery in Columbia, MO that really got under my skin: “We need three things: a good egg, some good sperm and a good uterus. And we can mix and match these.”

Gross. I can’t even. This is the world we live in. The creation of new human life is nothing more than a biological formula — a science experiment, rather than the mysterious fruit of a loving act between husband and wife.

For most pro-life advocates, the main problem with IVF is the fact that so many human embryos are destroyed in the process. In fact, some have actually suggested that IVF would be ethical if we could ensure that it could be done without destroying or discarding any human embryos.

There are many different acts through which children can be conceived (the marital embrace, rape, fornication, adultery, incest and various technical procedures) but only one way is in keeping with the dignity of the child. The Catechism explains:

Techniques that entail the dissociation of husband and wife, by the intrusion of a person other than the couple (donation of sperm or ovum, surrogate uterus), are gravely immoral. These techniques (heterologous artificial insemination and fertilization) infringe the child’s right to be born of a father and mother known to him and bound to each other by marriage. They betray the spouses’ “right to become a father and a mother only through each other.” (CCC, 2376)

Taking the creation of life out of its natural, God-given context and moving it into the science lab seriously alters how many view the wonder and mystery of new life and how that new life should be treated.

The desire for children is right and good, but a child is not something owed to anyone; it is a gift. Consciously or unconsciously, to desire a child as the end result of a technological procedure instead of the fruit of marital love is to treat the child not as a person to love, but a product to obtain.